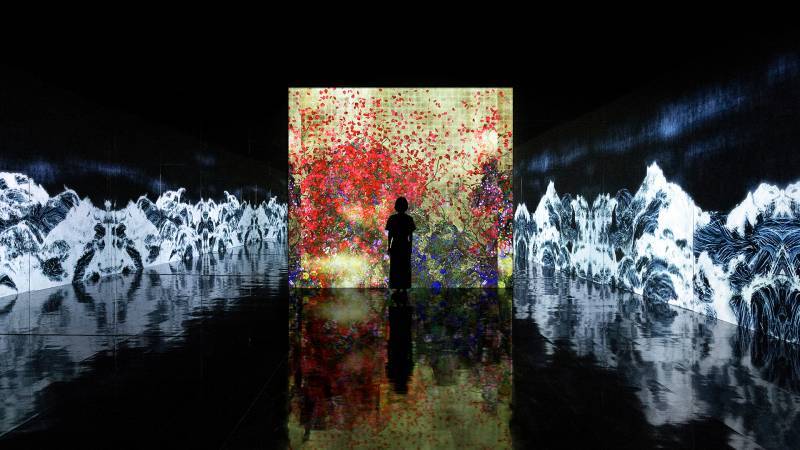 This is an installation made of one continuous wave. The waves projected are all connected and form a single, unbroken body of water. As we immerse and meld ourselves into the waves, we explore a continuity among people, as well as a new relationship that transcends the boundaries between people and the world.

The movement of water is simulated in a computer-generated three-dimensional space. The water is expressed as a continuous body after calculating the interactions of hundreds of thousands of particles. To visualize the waves, lines were drawn in relation to the movement of the particles. The waves created in 3-D space were then turned into an artwork in accordance with what teamLab refers to as ultra subjective space.

In premodern Japanese painting, oceans, rivers, and other bodies of water were expressed as a series of lines. These lines give the impression of life, as though water is a living entity.

This form of expression leads us to question why pre-modern people sensed life in rivers and oceans. Also, why did they behave as if they themselves were a part of nature? Perhaps something can be discovered by fusing the fixed objective world of today’s common knowledge with the subjective world of premodern people.

While viewing this artwork, if we feel a sense of life in the collection of lines — what can be called the subjective world of premodern people — then perhaps this is one aspect of objective recognition.

When viewing this artwork, as opposed to when watching images of waves captured by a video camera, people may feel that the boundary between themselves and the waves disappears. They feel immersed in the work, perhaps even feeling life in the collection of lines, as if the waves are luring them in. Perhaps we can find a connection to the way premodern Japanese people perceived the world and, consequently, how they behaved toward the world.

If we regard ourselves as a part of nature and consider nature not just as something to be observed, we might join pre-modern people in perceiving rivers and oceans as living entities. This is a way of seeing the world that engages us and allows us to feel that there is no boundary between ourselves and nature.

Continuous Life and Death at the Now of Eternity, Cannot be Controlled but Live Together

In the flow of time of reality flowers are born, bloom, then in the course of time they wither and die. The flowers are eternally repeating the process of life and death.

The world of the artwork becomes brighter with the sunrise where it is located and becomes darker as the sun sets. The flowers that bloom change throughout the period of one year.

When people touch the flowers, the petals scatter. But if visitors stay still, the flowers grow and bloom more abundantly.

This artwork is in continuous change, neither a prerecorded animation nor on loop. The work is rendered in real time by a computer program. The interaction between the viewer and the installation causes a continuous change in the artwork; previous visual states can never be replicated, and will never reoccur.