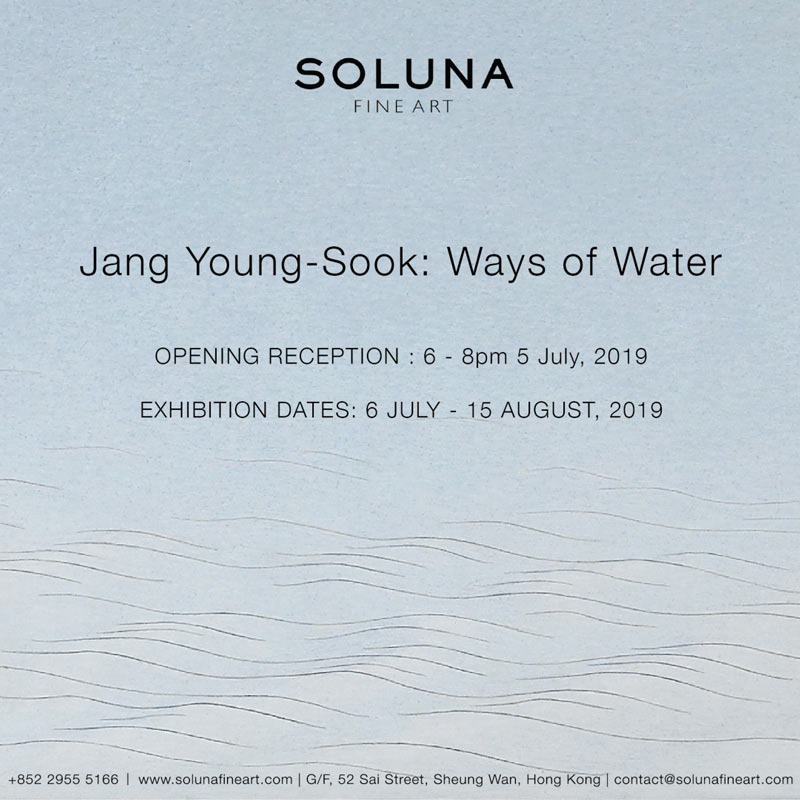 Soluna Fine Art is delighted to present Ways of Water,

“[…] I paint water which is not so visible to the eyes but is something absolutely essential to our survival. Water is not only the source of all life but also the core of reason in the Orient. Water always sinks to the bottom, aligns itself with the shape of the bowl and gently shines other things. […] I think sometimes as an artist, my water paintings are a vertex at the end of a long period of trials.”

Jang established her artistic career as a printmaker in the late 1970’s. Shortly after receiving her MFA from Hongik University, her talent was discovered and celebrated at the Grand-Prix 1st Space International Print Exhibition in 1980. At the time she made works consisted of minimal lines and faces; moving into the ’90s, she started to highlight the intrinsic relationship between human and nature by focusing on figurative works and drawings of plants.

Jang Young-Sook first started drawing water in the mid-2000s. In the Wave Series, Jang wants to capture the movement of water flows and the unstoppable strength in waves. She uses waves as a metaphor for her career and life – when water gathers to become waves it moves toward different directions; as life sometimes could be cruel, it could also be generous. In the Waterdrop Series, Jang pays attention to the different forms and shapes transformed by water: rain pours down in straight lines and makes endless concentric circles; the sound of dripping water drifts into the air like a hallucination; the afterimage left to the view after rain strikes the earth.

Both series symbolizes the impressions from nature and the pattern derived from images and minds that observed natural phenomena. To replicate the transparency in water, Jang has to apply multiple layers of diluted ink with a small brush before sealing the surface with acrylic paint. The process is so time-consuming and intensive, as Jang stated:

“[…] The deep transparency comes from the part where colors overlap many times. So the blue background in the paintings is a tedious task which takes a very long time to finish.”

Regardless of the different subjects, Jang’s work always focuses on the intensive constriction of moderation and simplicity. In her works, matters appear to be existing and non-existing; details are reduced and images are abstracted to merely a line, blurring the differences between reality and imitation. This gives Jang’s works a very unique and distinctive characteristic, and the unique characteristic originated from her unique childhood and lifestyle. Jang grew up in a Han-Ok (Traditional Korean House) with a Toenmaru (porch/ deck) and noticed different shades of shadows that formed under the sunlight. She became fascinated by the space between shadows and light and called it “a space that is neither outside or inside” which later on became the abstract ambiguous images in her works.

Jang Young-Sook’s work never stopped to comfort the viewer’s mind, like a fall of cooling rain in the summer. As the Influential art critic and the Chairman of Art Council Korea, Oh Kwang-Suonce commented: “As the images appear and disappear into blankness, one may feel a lack of clear consciousness in not being able to continue to appreciate the unique moment of viewing Jang’s work.”

Jang Young-Sook(b. 1951) received her B.F.A and M.F.A degrees from Hongik University in Seoul, Korea. She worked as a professor at Hongik University Graduate School of Fine Arts from 2005 to 2015. Her works are recently exhibited in White Wave Art Center (Seoul, 2016), KimNaeHyun Art Gallery (Seoul, 2012) and Posco Art Center (Seoul, 2008); she also participated in over 160 group exhibitions worldwide, including USA, Poland, Singapore, Japan, Brazil. Her work is found in the collections of the National Museum of Contemporary Art, Korea; Posco Art Museum, Korea; Hallmark Cards, Inc.; USA and more.