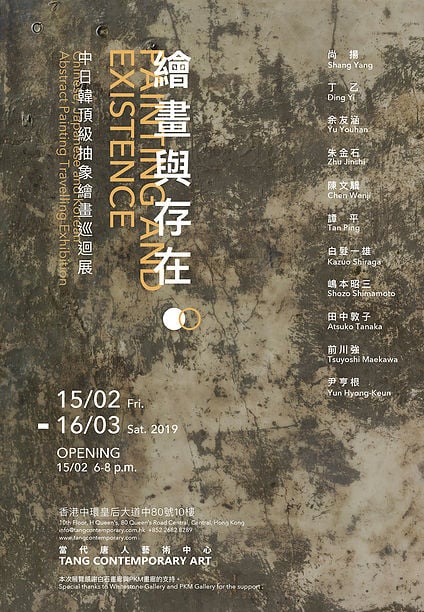 The concept of Gutai movement experiments was fully expressed in “Gutai Art Manifesto”: “Gutai art does not change the material but brings it to life. It does not falsify the material. In Gutai art the human spirit and the material reach out their hands to each other”. Within this framework, the members carried out brilliant performances: Kazuo Shiraga painted huge canvases with his feet, Shozo Shimamoto hurled glass bottles full of paint against the canvas, Atsuko Tanaka created geometric patterns that were formed by shapes of lamps and electric circuits, Tsuyoshi Maekawa used the rough texture of burlap surface to apply adhesion agent and oil paint. All these experiments made Gutai movement an indispensable part of the history of Asian contemporary art.

Danseakhwa (also known as Korean Monochrome Painting) movement emerged in the 1970s. The artists not only used white color but also applied black, red, blue, yellow, green and neutral colors such as brown, beige and gray regarded as colors of “rejection”. They tried to reveal the spiritual, material and executive nature that transcended color. Yun Hyong-Keun was influenced by Korean ancient scholar and calligrapher Kim Jeong-hui. He diluted the pigment with turpentine on smudged canvas to create a traditional ink dyeing effect similar to that of rice paper.
​
After the 1980s, having experienced the impact of Western abstract art, Chinese contemporary artists began creating abstract paintings. Shang Yang’s artistic concept is based on a solid vision. His works maintain the inner tension of abstraction and do not lack improvisational ease and humour. Ding Yi is considered to be a pioneer of Chinese abstract art. His cross-shaped symbols are his main visual symbols to transcend and confront the typical political and social allegorical paintings in China. Since the late 1980s, he used this symbol as a signifier of structure and rationality as well as a synonym for image representation that reflects the nature of things. Yu Youhan is one of the most representative artists of political pop art in the avant-garde art movement in the 1990s. He combines Chinese visual symbols with Western art expressions. His work had a major impact on cultural trends at the time and influenced an entire generation of young artists.
​
Zhu Jinshi’s “thick paintings” became mainstream among constructivist and neo-geometrical styles in abstract painting in the 1990s in the West. Although he was impressed by the distinctive style of Gerhard Richter, Julian Schnabel, Per Kirkeby, Kazuo Shiraga in the 1980s, upon returning to painting in the 2000s, he paid more attention to new cutting-edge artists, such as Cecily Brown, who shattered the idea of traditional abstraction. Tan Ping’s work develops from the standpoint of modern and contemporary western art yet reflects on, or reconceptualizes the cultural traditions of China. Recognizing and accepting the cultural logics and art history of contemporary Chinese art as distanced and separate from Western parallels allows Tan to develop an individualized form of expression. Chen Wenji spent 20 years refining his artistic practice and working with figurative realism. Since 2006, he has gradually incorporated his personal artistic style into the category of abstract thinking. He became more minimalistic and rational in his approach to formal expression, and his concept also emphasizes the visual embodiment in spatial relations.
​
The exhibition will be also shown at Whitestone Gallery Taipei in September 2019, then at Karuizawa Art Museum in April 2020 and then it will travel to Tang Contemporary Art Beijing in September 2020.

Special thanks to Whitestone Gallery and PKM Gallery for the support.

Tang Contemporary was established in 1997 in Bangkok, and now holds four exhibition spaces in Bangkok, Beijing and Hong Kong. Tang Contemporary is fully committed to producing new projects that promote Contemporary Chinese and Southeast Asian art regionally and worldwide and to encourage a dynamic exchange between Asian artists and those abroad.