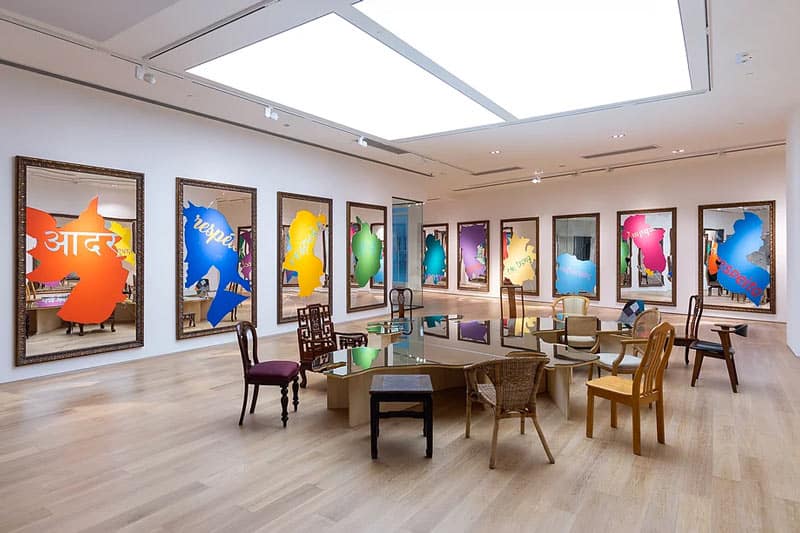 Tang Contemporary art is proud to announce the opening of a solo exhibition “Respect” in collaboration with VNH gallery and GALLERIA CONTINUA, for renowned artist of the Arte Povera movement Michelangelo Pistoletto that will be shown at H Queen’s gallery space from May 10, 2018 to June 16, 2018. This exhibition presents a series of installations “Respect (2016)” and “South China Sea – Love Difference (2005)” brought to Hong Kong from Paris and Italy will be first major appearance of this widely known Italian master in Asia.

In October 20th 2016, Pistoletto staged a spectacular performance in Paris, where the artist used a wooden hammer to smash mirrors and invited the audience to participate in exposing the hidden message behind each mirror. The installation is called “Respect” as after being shattered, each mirror exposed the word “respect” in one out of 23 languages. If some people explain the multiplicity of languages as the fruit of divine intervention intended to “confound” disrespectful humankind (cf. the myth of the Tower of Babel), here they unite to promote, in a symphony of vivid colors, a fundamental value that knows no borders.

For Pistoletto, these mirrors are at once a reflection of tangible realities stemming from personal contemplations and vectors to the unexplored and the new that allows both audience and space become one part. First time in Yokohama Triennale in 2008, a performance called Seventeen Less One (2008), then in the theme exhibition at the Venice Biennale in 2009, Pistoletto smashed several large mirrors with a wooden hammer, and during the process of destruction, he maintained a false sense of beauty, forcing people to shatter individualism and narcissism to reach for something else, and toward others. The concept of “respect” is also born of listening and reaching out to others. In 2003 Pistoletto won Venice Biennale’s Golden Lions for Lifetime Achievement with the “Love Difference Table” series, a signature symbol of respect and love to others.

The installation “Respect” originates in France. The artist believes that the French first created the values of humanism in history and proposed the views on freedom, equality, fraternity, and respect for the rights of others. (Declaration on Human Rights and Civil Rights, Article 4, 1789). In the era of globalization, the world entered a phase in which successive tragedies and the ensuing debates have tended to encourage disengagement and sectarianism, or even the rejection of others. Artist uses broken mirrors and the myth of the “Tower of Babel” to invite Hong Kong audiences to reflect on the current world tendencies. “Art is the science that best reflects the human condition. Human beings make mistakes—their energy drives them to make mistakes—but art allows them to rise above their errors, understand them and strive for a better life.

ABOUT ARTIST
Michelangelo Pistoletto was born in Biella in 1933. He began to exhibit his work in 1955. An inquiry into self-portraiture characterizes his early work. In the two-year period 1961-1962 made the first Mirror Paintings, which directly include the viewer and real time in the work, and open up perspective, reversing the Renaissance perspective that had been closed by the twentieth century avant-gardes. These works quickly brought Pistoletto international acclaim, leading, in the sixties, to one-man shows in important galleries and museums in Europe and the United States. The Mirror Paintings are the foundation of his subsequent artistic output and theoretical thought. In 1965 and 1966 he produced a set of works entitled “Minus Objects”, considered fundamental to the birth of Arte Povera, an art movement of which Pistoletto was an animating force and a protagonist. In 1978, in a show in Turin, Pistoletto defined two main directions his future artwork would take: “Division and Multiplication of the Mirror” and “Art Takes On Religion”. Yokohama Triennale, ‘Seventeen Less One’, 2008 Courtesy MOMA Collection, New York and GALLERIA CONTINUA, San Gimignano 10th Floor, H Queen’s, 80 Queen’s Road Central, Central, Hong Kong www.tangcontemporary.com

In 2003, he won the Venice Biennale’s Golden Lion for Lifelong Achievement. In 2007, in Jerusalem, he received the Wolf Foundation Prize in the Arts, “for his constantly inventive career as an artist, educator and activist whose restless intelligence has created prescient forms of art that contribute to fresh understanding of the world.” In 2013 the Louvre in Paris hosted his personal exhibition “Michelangelo Pistoletto, année un – le paradis sur terre”. In this same year, he received the Praemium Imperiale for painting, in Tokyo. In 2016, he exhibited his works in Havana, Cuba, at the Museo Nacional de Bellas Artes, with a great retrospective Exhibition. In 2017 the artist participates at the collateral event of 57 Venice Biennial with the exhibition “One and One makes Three” at the San Giorgio Maggiore abbey complex in Venice. In 2018, Tang Contemporary Art Hong Kong is going to bring his solo exhibition “Respect” that will be his first major appearance in Asia.