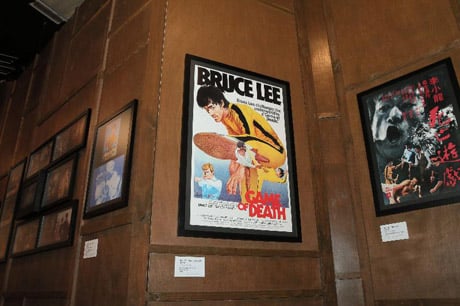 This year marks the 40th anniversary of the passing away of the internationally renowned martial arts movie star Bruce Lee. A large-scale exhibition, “Bruce Lee: Kung Fu • Art • Life”, is being held at the Hong Kong Heritage Museum in commemoration. Presented by the Hong Kong Government’s Leisure and Cultural Services Department (LCSD) and jointly organised by the Bruce Lee Foundation and the Hong Kong Heritage Museum, the exhibition is one of the highlight programmes of the “Vibrant Hong Kong” theme under the territory-wide “Hong Kong: Our Home” Campaign launched this year.

Sponsored by Fortune Star Media Limited, the exhibition is open from 20th July 2013 and runs for five years until 20th July 2018 at the Hong Kong Heritage Museum.
The exhibition features more than 600 precious relics related to Bruce Lee and the exhibition gallery houses several sets of reconstructions, which were created with ideas inspired by prominent scenes in Lee’s five classic kung fu movies as well as his gym and his study to enhance visitors’ experiences in viewing the exhibition

Bruce Lee took kung fu to a whole new level of recognition and a new international audience with his natural charisma and physical prowess. He introduced Hong Kong to the world through his films and did more in this area than any other person. Movies such as “Fist of Fury”, “The Way of the Dragon” and “Enter the Dragon” have been considered by film critics to be all-time classics that transcend generational, cultural and geographical boundaries. The exhibition takes visitors on a marvelous journey through the life and achievements of Lee: from a rebellious street fighting child growing up in Kowloon to accomplished Hollywood actor and director and revered kung fu master.

Bruce Lee was born on 27th November 1940, in San Francisco. His father, Lee Hoi-Chuen, was a celebrated Cantonese opera actor and his mother, Ho Oi-yee, was a daughter of prominent Hong Kong businessman Ho Kom-tong. Lee was brought back to Hong Kong when he was a newborn. Because of his father’s strong connections to the world of show business, Lee first came into contact with cinema when he was an infant, making his silver screen debut as a baby in the Cantonese film “Golden Gate Girl”, shot in the US in 1941. Outstanding performances in the films “The Kid” (1950) and “Infancy” (1951) earned him praise as a “genius child actor”. He left for the US to pursue his studies in 1959 after finishing a final film in Hong Kong, “The Orphan” (1960).

Lee was passionate about martial arts when he was small. He became a student of the Wing Chun grandmaster Ip Man at the age of 13. After he went to the US, the lifestyles and world views of Western society became catalysts for his new conception of the philosophy of martial arts. He began teaching Wing Chun when he was studying at Edison Technical School in Seattle, and later, in 1962, he founded his own Jun Fan Gung Fu Institute at a permanent venue. He also named the martial arts system that had been brewing in his mind Jeet Kune Do – a style with no fixed technical movements and no specific forms.

In 1965, Lee was invited by 20th Century Fox to play the role of Kato in the US TV series “The Green Hornet”. His agile and skillful kung fu alerted Hong Kong film producers to his talents, and in 1971 he returned to Hong Kong to resume his career and starred in a number of sensational movies, including “The Big Boss” (1971), “Fist of Fury” (1972), “The Way of the Dragon” (1972) and “Enter the Dragon” (1972). His true and hard-hitting kung fu and jaw-dropping nunchaku skills mesmerized audiences. Lee not only took Chinese kung fu films to the international market but also reached the peak of his life and his career. Sadly, he died suddenly during the shooting of his last film, “The Game of Death”, on July 20, 1973, at the age of 32.

Occupying a total area of 850 square meters, the “Bruce Lee: Kung Fu • Art • Life” exhibition features more than 600 precious relics related to Bruce Lee on loan from a number of local and overseas collectors, including memorabilia of Lee and his costumes, books and gym equipment, as well as his articles. The exhibition gallery also houses several sets of reconstructions, which were created with ideas inspired by prominent scenes in Lee’s five classic kung fu movies as well as his gym and his study. Also featuring a 3D hologram animation on Bruce Lee, a newly created 3.5-metre-high statue of Lee and the 75-minute documentary “The Brilliant Life of Bruce Lee”, the exhibition will enable visitors to review Lee’s life story based on his profile, his movies, his martial arts and his development as a cultural phenomenon from a more comprehensive, in-depth and independent perspective.