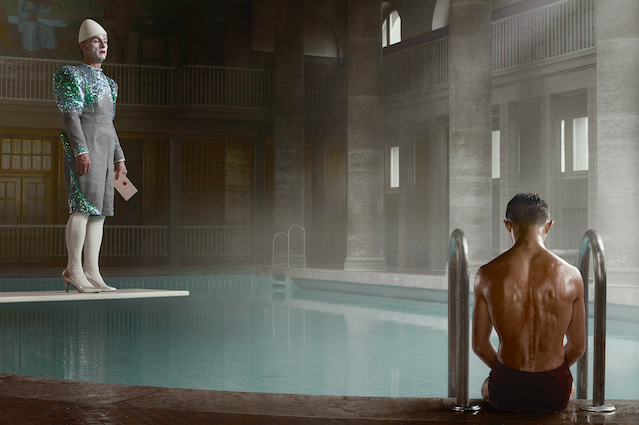 “Parallel: Erwin Olaf” presents nearly fifty photographs from the dynamic career of renowned Dutch photographer Erwin Olaf, covering the recent 15 years of his creative work. A number of the works will be shown in China for the first time. The year 2019 marks a significant moment in Olaf’s career, one of the most important and influential photographers at work in the Netherlands today. “Parallel: Erwin Olaf” is one of several major exhibition events that will take place through 2019 to celebrate his career as he turns 60, the others being at the Gemeentemuseum in The Hague, and The Hague Museum of Photography. “Parallel: Erwin Olaf” opens at SCoP on 3 March 2019, coinciding with the Shanghai Art Weekend that is held ahead of the Art Basel Hong Kong fair, as a major event on the international art calendar.

Olaf’s expertise lies in fashion photography and in creating provocative advertising campaigns. On this occasion, however, “Parallel” eschews Olaf’s most widely recognized images in favor of exploring a more personal side of the photographer’s work as he marks his own special career milestone. Olaf’s work matches parallel strands of stylistic excellence and visual intricacy. The works also weave together parallel elements that are on the one hand autobiographical, and on the other, dedicated to entirely constructed Mis-en-scène.

As Olaf says, “My work is always a reflection of my personal life and beliefs. I am looking for more detail in human emotion instead of focusing on grand gestures. I want people to think about the subtext of the photograph. I create a highly stylized look, which draws in the viewer… ‘lured’ by the beauty’. But once they are caught, I hope they then get the second message as to what exactly is different for each series.”

Beneath the veneer of glamor and perfection that has come to characterize Olaf’s style – in his own words the “highly stylized staged” aspect of his photography —“Parallel” seeks the deeper message that lies beneath the surface, and which is the concept that directs collections of images like Rain, Hope, or Grief. These series share a common focus on the human condition “from the vulnerability of simply being, to the relationship between power and submission”. Olaf’s sense of the human condition often seems to revolve around alienation, the distance between people, anonymous encounters and awkward interactions, which he feels to be a condition of the contemporary world.

Olaf’s work further reveals deep roots in the centuries of Dutch history and traditional art and demonstrates how the photographic endeavor connects with history as the history of human experience. Running through the majority of series that Olaf has produced through the 15-year period explored here is a striking juxtaposition between adults and children. This is the defining feature of his signature series Berlin created in 2012. “Berlin focuses on the power of youth,” he says. So, it is a work in which children are treated as adults. The process of making a city theme around Berlin inspired a sequel in 2017 titled Shanghai. “Shanghai,” he says, “reminds me of young, confident adolescence full of boundless energy, convinced of its own power, and doing whatever it takes to reach its potential.

SCoP would like to thank Erwin Olaf and everyone at Erwin Olaf Studio for their enthusiastic support for and assistance with the exhibition. On behalf of the artist, we thank Magda Danysz from Magda Danysz Gallery for her support. It has been made possible by the Mondriaan Fund to bring the artist and works to China, to whom we offer special thanks. Thanks also go to Bart Hofstede and Ineke van de Pol from the Embassy of the Kingdom of the Netherlands, Beijing and Consulate General of the Kingdom of the Netherlands, Shanghai and Elva Ma for supporting the catalog with its PCAP Cultural Projects Programme.

We would like to thank Dior for its continuous support for SCoP, and Vanke for enabling us to expand our public education program.

Erwin Olaf (b. 1959, Hilversum, the Netherlands) is an internationally exhibiting artist with works in the collections of museums and galleries around the world. Olaf has received numerous highly prestigious commissions and awards. In 2018, 500 key artworks from Olaf’s thirty-year oeuvre were accepted into the Rijksmuseum collection. This follows recent official portraits for the Dutch royal family and the design of the new Euro coin for King Willem Alexander. Now internationally renowned, Erwin Olaf’s photography remains an essential part of the Netherlands’ cultural heritage. Taco Dibbits, Rijksmuseum director, says, ‘his work is deeply rooted in the visual traditions of Dutch art and history’ and that consequently, Olaf is ‘one of the most important photographers of the final quarter of the 20th century’.