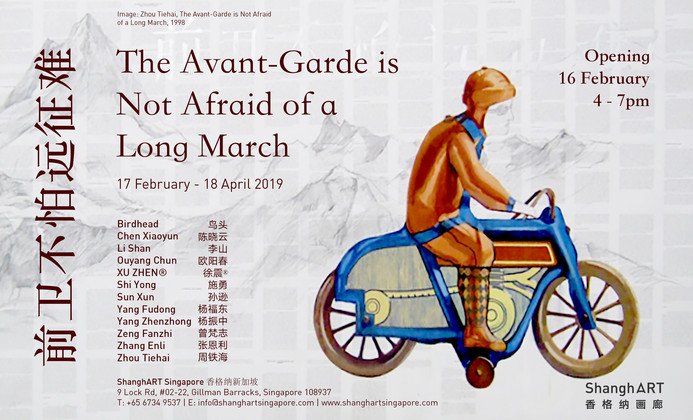 One of the significant moments in the history of Chinese contemporary art occurred in 1989 when the China/Avant-Garde Exhibition survived for a mere two hours before being shut down.
As a participant of that exhibition and a leading figure in the Chinese avant-garde movement, Li Shan demonstrates his perceptiveness as an observer of his times through his political pop paintings and artistic approach to bioethics – a topic hardly discussed in art during its time. The work exhibited comes from his Rouge series, wherein the fuses political icons with abstract representations of a lotus flower; a symbolic reference to femininity and frivolousness.

Later artists such as Shi Yong, Zeng Fanzhi and Zhou Tiehai carved out new paths in the Chinese art scene despite the general cultural stagnation after the episode. One of the pioneers in installation and media art in China, Shi Yong took a decade-long hiatus in his artistic practice to engage with the art scene from the perspectives of various stakeholders, only returning to making art in recent years. Zeng Fanzhi’s artistic practice has seen various changes over the years, while Zhou Tiehai has reinvented himself in taking on directorial roles in museum and art fair.

While Zhang Enli and Ouyang Chun depict their observations of the mundane and everyday life through paintings, Yang Fudong, Chen Xiaoyun, and Yang Zhenzhong rose to prominence in working with new media art and video works since the early 1990s. The works shown in the exhibition reveal the different sides of their practice and their persistent efforts in exploring different themes and mediums.

This exploration can also be seen in Xu Zhen, Birdhead, and Sun Xun’s practices, as their works often strive to reconcile various subject matters across a wide spectrum, presented in different mediums ranging from installations, photography, painting, sculptures, woodblock printing, and conceptual art. As if taking on the mantle of their predecessors, they strive to achieve individual success through persistent rejection of the stable and comfortable for a critical, albeit playful, outlook of what is yet to be done.

BIRDHEAD, established in 2004, lives and works in Shanghai. The artistic practice of Birdhead (Song Tao b.1979, Ji Weiyu b.1980) is based on photographs but also beyond the philosophy of photography. Capturing all the beings around them, Birdhead digests and applies the thinking mode of conceptual art into the context of their image interpretation. By combining the photographic matrix, collage, particular mounting technique and so on, Birdhead delivers a “Birdhead world” in various exhibition spaces and humanistic environment.