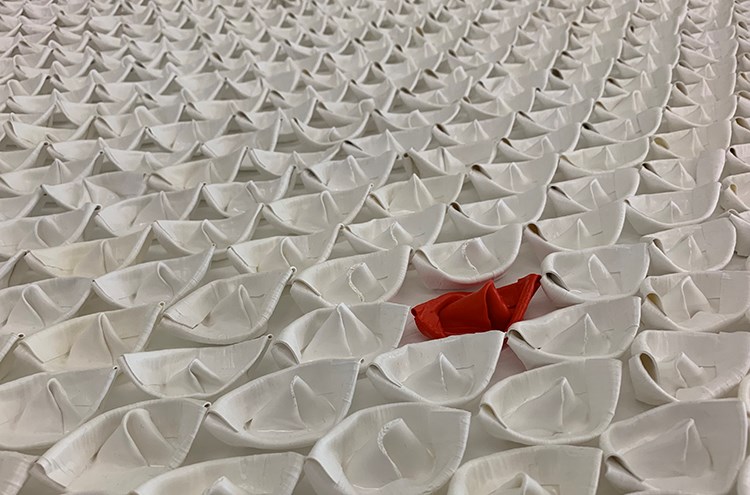 Ng Lung Wai is an extremely exciting and rare breed of artist. His artworks induce a level of exhilaration born from the visionary brilliance of the composition and the level of the artist’s natural enthusiasm that seemingly is harnessed through the practice he deploys. Simply having the foresight to compose art works with such a diverse selection of materials causes Ng’s audience to revel in contemplation, on discovering his artworks for the first time.

The artist brings into effect techniques he has mastered through a diverse range of experience, thus furthering his studies through these unique creations. Referencing artists that have developed a unique way of making art in particular stages of their career such as, Jackson Pollock and Simon Hantai, Ng Lung Wai seeks to expand the vision of his artistry while exploring the concept of painting itself. Is the act of folding paint to make an artwork and defining the space on a canvas, a painting?

Throughout the Tibetan and Nepalese, Himalayan region, one can see prayer flags of five colors; blue, white, red, green, and yellow – hanging throughout the landscapes and architecture.

These flags are symbolic and are deeply rooted in ancient Asian culture. Traditionally Buddhist mantras would be inscribed on these types of flags.

The 5 colors are representative of the elements: Sky, Air, Fire, Water, and Earth, all the important essential elements. This is a theory that applies around the world through universal synchronicity across cultures and therefore has deep-seated relevance in all of humanities belief systems.

Accepted by the people living in these regions, the prayer flags would hang in places where people could see them on a daily basis, they were placed there for everyone in the community to experience as a medium to promote peace. As they blow in the wind they induce a desired spiritual effect among the people and the surrounding countryside.

With over 10 years of collecting and experimenting with a rich diversity of materials as his chosen media for his artistic creations, Ng Lung Wai has now begun a new chapter of his practice whereby, he has developed and pioneered a technique of folding paint. This technique draws inspiration from the cultural and historical art form “Chinese paper folding” or “zhézhi”, the art of paper folding that originated in medieval China. To employ this technique to create an artwork with acrylic paint and canvas questions the construct of a painting. The artist understands that contemporary artists do not define painting by the materials or process. Then should it be necessary to label Ng Lung Wai “a painter” or the artworks in this series “paintings”?

When the artist was a child of 7 years old he learned the practice of folding paper and was able to fold paper into miniature boats. In what the artist sees as a blessing, he has now developed a technique of folding paint, which enables him to create the points of paint based vessels, assembled on canvas. This form of abstraction and pointillism involves colors that are culturally referenced and further investigates the artist’s studies of his heritage.

Having developed this breakthrough technique furthers his explorations within his artistic practice. In the previous series, the artist developed pointillist techniques using contextual materials relevant to the subject. Taking this mastery to new heights, Ng Lung Wai embarks on a cultural investigation, deep into his ancestral roots.

Just as culture develops and builds up over time; the folded paint boats become vessels of culture, vehicles in which to travel through time. And just as it takes a great amount of time investment for the artist to create each individual point, each boat becomes a representation of culture in time. As life’s journey is easy to be broken, the course of our lives change.

“Origami” the Japanese word for paper folding was widely popularised by the 20th Century Japanese paper artist Akira Yoshizawa, however, traditional Chinese paper folding concentrates mainly on objects like boats and hats rather than the animals and flowers of Japanese origami. The earliest document showing paper folding is a picture of a small paper boat in an edition of Tractatus de sphaera Mundi from 1490 by Johannes de Sacrobosco. Although the learned opinion that is commonly accepted is that it is highly likely that paper folding originated much earlier than that in China and Japan for ceremonial purposes.

This breakthrough technique developed by the Hong Kong artist stands to raise a profound dialogue, enquiring as to the conception of painting itself. If the primary material used is paint in order to communicate the context of the artwork and paintbrushes are even used in the creative process. Are these creations by Ng Lung Wai indeed paintings?

By bringing into question the simple definition of “painting” and “a painting”, Ng Lung Wai is able to redefine his artistry in such a way that could be regarded as a revelation. When we think of the practice of “painting” we tend to think of anything created by using a brush to apply paint, watercolor or Chinese ink to a surface. When other materials are used then the term “mixed media” is applied. The more conceptual aspect of “a painting” describes the idea of an object made with paint on a surface that is able to stand alone as an object independent of its background. Painting on a wall is “painting” yet it is not “a painting”. Whereas calligraphy brushed on a surface is not “a painting” these distinctions become complicated with “abstraction” thus leading to paintings without representation.

As with Ng Lung Wai’s earlier works, a study of colors in culture entitled “Meaning a Thousand”, colors have long been associated with different meanings, depending on culture and circumstances. In this earlier body of work, the combinations of color circles represented unique meanings related to their culture of origin. Ng Lung Wai’s practice has evolved to enrapture his audience by deconstructing cultural references by the use of relevant materials and the construction of his subjects and artworks. His artworks are created in a fashion that is not only relevant to the time that we live in but also transport viewers back in time to share in his heritage.

“Also we pray for all with Great Wisdom; we seek happiness within ourselves for experiencing it with others.”