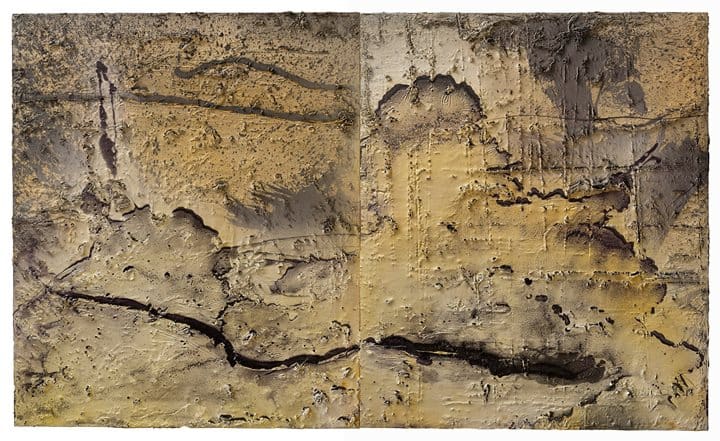 Richard Koh Fine Art (RKFA) is pleased to announce a solo exhibition by Wong Perng Fey at Richard Koh Fine Art, 229, Jalan Maarof, Bukit Bandaraya, Bangsar 59100, Kuala Lumpur. The exhibition, entitled Impetus, is the artist’s restitution to Malaysia and his fourth solo exhibition with the gallery. The exhibition is scheduled to run from 6 – 20 January 2018 and will present 6 large paneled pieces produced during his eviction and closure of HeiQiao village, Beijing where the artist had resided for 7 years. The Opening Reception will take place on Saturday, 6 January 2018, from 5 – 8pm.

Expanding on his characteristic flair for abstraction, Wong continues this series on a more sombre note – the inevitable end to a journey which promised new beginnings. Impetus is a parting note, in it echoes the tumultuous journey undertaken as the artist comes to terms with the eviction of the artist colony in HeiQiao village, Beijing. These dynamic, large multipaneled pieces contain strong statements of his internal struggles – the displacement of working habits and coping mechanisms in which he had developed and found solace in over the years. They mirror his sentiments as he looks back at the ambitions he brought with him over the 7 years of his inhabition, sparked by the sense of loss experienced during the disbandment of his camaraderie.

Varying emotions from vigour and self–assurance, to uncertainty and despair are vividly embedded within Wong’s panels. They permeate his senses as he peered back into the then newly vacated studio space, a space where he had harboured his early ambitions and eventual strife. They continued to haunt him as he finally conceded to record in paint his raw confrontation. Wong called for his unfinished canvases and aluminium panels to be brought back into emptied his studio, he paints over them with rhythmic gestures of earthy tones and tonal gradients into shimmers of purple and black. These complementary palattes are skillfully rendered into an explosion of expressive imageries of lyrical abstraction as he battled his inner demons.

HeiQiao village, located in Southeastern Beijing, is often referred to as an epitome of the development in Chinese society. It had been the largest cluster of artists’ studios in Beijing since 2006 until April 2017. Its diversified and inclusive community makes up for the challenging living conditions that the village affords. A smelly creek divided the artist cluster from the village comprised mostly of migrant workers from rural villages all over the country. HeiQiao village, a place that lived towards chaos and ruin with limited access to healthcare and creature comforts, is finally lost to the fast pace of urbanization in June 2017.

Impetus is an artist’s journey in finding himself, on experiencing loss and coming full circle. This deeply intimate presentation also questions the movements and mutations of space in relation to identity, as well as the displacement of strategic urbanization for economic interests.

Wong Perng Fey (b. 1974, Kuala Lumpur) is an experimental and versatile painter who graduated from the Malaysian Institute of Art in 1998 under scholarship. He was awarded the Artist Residency in Rimbun Dahan, Kuang in 2002. His works are in many prominent public collections such as the National Visual Arts Gallery, Kuala Lumpur; Bank Negara Malaysia Museum art Gallery, Kuala Lumpur and Galeri Petronas, Kuala Lumpur. He lives and works in Beijing.

Perng Fey’s gestural paintings of figures, nature, and natural vistas fluctuate between abstraction and figuration with an acute sensitivity to colors, layers and textures. His works consist of a diverse subject matter, ranging from traditional landscape and portraiture to abstraction that exhibits a talented and confident brush play. His works become more than a picture plane and is transformed from the documentation of actions and mistakes into a plane that records gestures and mental states.