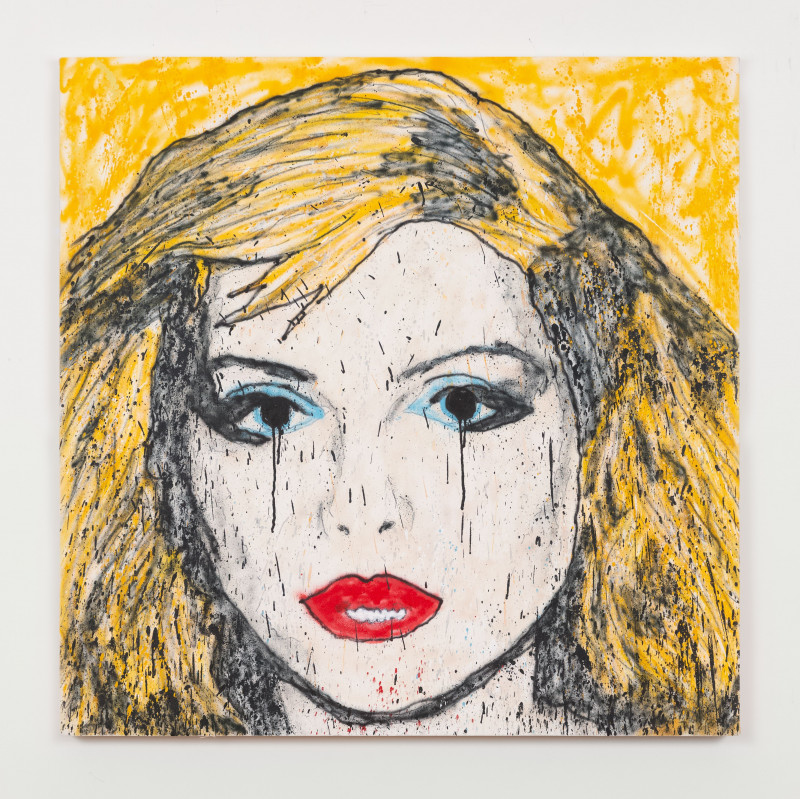 He was born in 1974 in Osaka, Japan and lives and works in Tokyo, Japan.
A graduate of New York City’s Parsons School of Design (BFA, 1996), MADSAKI was born in Osaka, Japan, and raised in New Jersey, USA – experiences between two cultures that formed his aesthetics and personality. While much of MADSAKI’s work centers on his interest in art history and critiquing mass culture with references to slang, movies and manga characters, the artist has recently been exploring more personal, intimate topics. To express this visually, MADSAKI developed a signature style using spray paint as a fine art medium, stemming from the fact that he has never participated in illegal graffiti on the streets. The artist is particularly known for his Wannabe series, which at first glance humorously targets old masters, yet their deeper meaning is a reoccurring theme that can be found throughout MADSAKI’s artistic practice – an attempt to use laughter and humor as both distraction and therapy for his internal turmoil.

Emmanuel Perrotin founded his first gallery in 1990 at the age of 21. He has since opened over 18 different spaces with the aim to continue offering increasingly vibrant and creative environments to experience artists’ works. He has worked closely with his roster of artists, some for more than 25 years, to help fulfill their ambitious projects. Perrotin has galleries in Paris, Hong Kong, New York, Seoul, Tokyo, and Shanghai, totaling approximately 7000 square meters (75,000 square feet) of exhibition space across its various locations.

From 2013 to 2016, Perrotin New York has been housed in a historic building on the Upper East Side’s iconic Madison Avenue. After three successful years there, Perrotin expanded in April of 2017 to a 2,300 square meters (25,000 square feet) space and relocated to 130 Orchard Street in New York City’s most dynamic arts neighborhood, the Lower East Side.

In 2016, Perrotin inaugurated a 240 square meters (2,600 square feet) gallery in Seoul which includes a bookshop displaying unique editions & books published by the gallery. Located in the heart of the museum and gallery district on the first and third floors of the same building as Christie’s office at 5 Palpan-Gil, Jongno-gu district, the gallery is in close proximity to the National Museum of Modern & Contemporary Art and Daelim Museum and just in front of the Blue House/President’s residence and Gyeongbok Palace.

In June of 2017, Perrotin opened his newest gallery in Tokyo on the ground floor of the Piramide building at 6-6-9 Roppongi Minato-ku Tokyo. The 130 square meters (1,400 square feet) gallery is located in the center of the Roppongi area, a cultural and vibrant neighborhood, which gathers a large number of museums, including the Mori Art Museum, Suntory Museum of Art, National Art Center (Art Triangle Roppongi), and many well-established galleries.

In 2018, Perrotin launched a new gallery in Shanghai, located in the heart of Shanghai’s Bund quarter. Perrotin Shanghai will occupy the top floor of a historic three-story brick building (27 Huqiu Road) known as “Amber Building”. Built in 1937, it is a former warehouse used by the Central Bank of China during the Republican period. The 1,300 square meters (14,000 square feet) gallery space includes a mezzanine and several exhibition rooms. In keeping with the building’s modernist elegance, original 1930s elements of the building are preserved including its 6 meters (20 feet) high wooden beam ceiling.