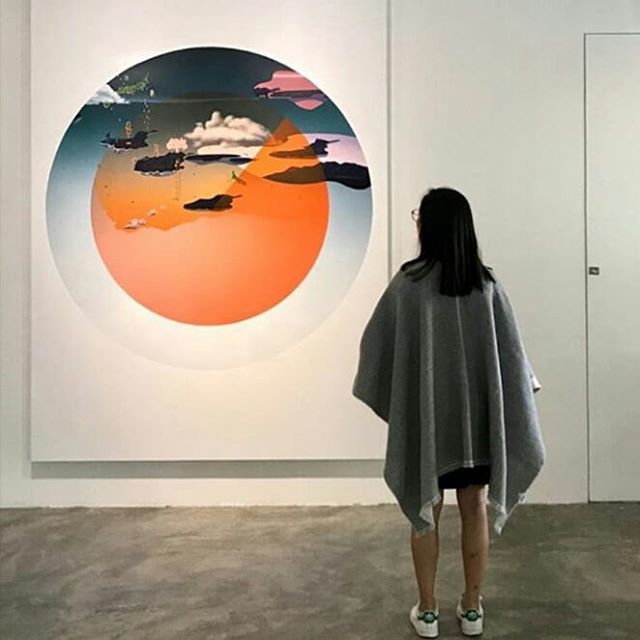 Singapore—Pearl Lam Galleries is pleased to present Double Bounce, a solo exhibition featuring painting, sculpture, installation, and film works by Indian artist duo Thukral & Tagra. Launching the Galleries’ new space at Dempsey Hill, the artists will transform the exhibition hall into a compound of inventive, playful, and thought-provoking works. The exhibition continues the artists’ reinterpretation of Indian mythology through the vocabulary of ping-pong, while simultaneously pondering the meditative and spiritual aspects of play. Beginning from the notion that a ball cannot bounce on the same side of the court twice, the titular concept of double bounce frames the exhibition through the delicate balancing act involved in everyday existence.

The exhibition opens with an ethereal, enigmatic painting, Buddha – Study II, a serene landscape composed of partial bits of sky, clouds, and mountains. Pivoting around the image, a warm gradation of orange emphasizes the circular form of the work, suggesting a cyclicality and impermanence to the scene. Alluding to Buddha, the divine being intrinsic to an understanding of Indian mythological texts, the work contemplates the universal tendency in many traditions to think of spirituality in an all-encompassing, non-denominational sense.

Anchoring the exhibition, Mythological Induction narrates the story of Kalki, the final incarnation of Lord Vishnu, reducing prophecies and characteristics of the avatar into possible logical relations. With poignant insertions of visual cues and suggestive metaphors drawn from a diverse range of cultural references, the series of paintings transform the conservative form of the Venn diagram into a visceral viewing experience. Probing the unconventional connection between the spiritual and the mathematical, the series reflects on how society is conditioned to think about God and prayer.

Stretching across the central space, Lullament is a kinetic installation comprising ping-pong balls softly rolling to-and-fro along steel tracks, accompanied by the gentle hum of fans. The central motif of the ball as an unsettled being, ever-moving and evolving, extends the metaphor of ping-pong to everyday life. As the therapeutic push-and-pull motion develops into a soothing rhythm, the work induces a restorative effect on the viewer, invoking the use of lullabies in easing one through the transition between wakefulness and slumber, between life and death.

In contrast to the languid movement of Lullament, the film Present Continuous foregrounds the tension involved in the act of balancing one’s game as one meanders through existence. Mundane day-to-day scenes in the city are punctuated by the action of a rapidly bouncing ping-pong ball, mirroring the ticking of time or the beating of a heart. The arbitrary, prosaic passage of time is thus juxtaposed against a relentless temporal awareness. Played continuously, the film blurs the notion of time into an indistinct loop without a clear beginning or end.
Addressing mythology, spirituality, and the nature of existence through the terminology of ping-pong, Thukral & Tagra’s works rejuvenate traditional narratives and symbols to give audiences a fresh understanding of cultural matter.

Jiten Thukral (b. 1976, Jalandhar, Punjab, India) and Sumir Tagra (b. 1979, New Delhi, India) are based in Gurgaon, Haryana, a suburb of New Delhi. They work collaboratively in a wide variety of media including painting, sculpture, installation, film, and design.
Thukral & Tagra blur the lines between fine art and popular culture, product placement, and exhibition design, as well as artistic inspiration and media hype. With playfulness and humor, their works comment on the globalization of consumer culture and its repercussions, which are being experienced in India today. They pose thoughtful questions about the nature of Indian identity as articulated by Indians themselves and projected onto India by the rest of the world.

Thukral & Tagra have worked together since 2003 and have held solo exhibitions all over the world, including in Singapore, Japan, Korea, China, Italy, Germany, the United Kingdom, Austria, and more. Their works have been included in group exhibitions on multiple international platforms such as the Mori Art Museum in Tokyo, UCCA Beijing, Lyon Museum of Contemporary Art in France, Pompidou Centre Paris, Arken Museum in Copenhagen, Helsinki Art Museum Tennis Palace in Finland, Yerba Buena Center for the Arts in the USA, and Nature Morte in Berlin, among many others.

Founded by Pearl Lam, Pearl Lam Galleries is a driving force within Asia’s contemporary art scene. With over 20 years of experience exhibiting Asian and Western art and design, it is one of the leading and most established contemporary art galleries to be launched out of China.

Playing a vital role in stimulating international dialogue on Chinese and Asian contemporary art, the Galleries is dedicated to championing artists who re-evaluate and challenge perceptions of cultural practice from the region. The Galleries in Hong Kong, Shanghai, and Singapore collaborate with renowned curators, each presenting distinct programming from major solo exhibitions, special projects, and installations to conceptually rigorous group shows. Based on the philosophy of Chinese literati where art forms have no hierarchy, Pearl Lam Galleries is dedicated to breaking down boundaries between different disciplines, with a unique gallery model committed to encouraging cross-cultural exchange.