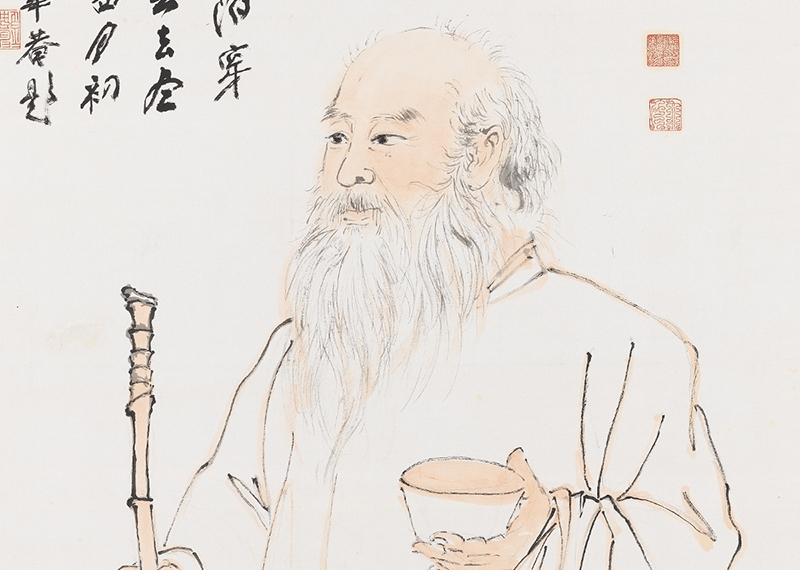 Silhouette of a Great Master: A Retrospective of Chang Dai-Chien’s Art on the 120th Anniversary of His Birth

Chang Dai-Chien (1899-1983) was a native of Neijiang in Sichuan and had a personal name, Yuan. He also went by the style name Jiyuan and was known as Daqian (Dai-Chien) jushi, the name of his studio being Ta-Feng Hall. As a child, he began to learn painting from his mother Zeng Youzhen (1861-1936), and later in Shanghai, he took Zeng Xi (1861-1930) and Li Ruiqing (1867-1920) as his teachers, who furthered his training in the arts of poetry, painting, and calligraphy.

Chang Dai-Chien was a master of legendary proportions who led a dramatic life, including travel to Japan to learn textile dyeing as a young adult, joining a monastery and briefly becoming a Buddhist monk after his return, and making a journey to China’s far west to copy wall paintings at the grottoes of Dunhuang during the Second Sino-Japanese War. Then, in 1949, he left China for good and settled down in various places overseas, holding exhibits of his painting across Asia, Europe, and the Americas and becoming the most famous Chinese painter on the international art scene of the twentieth century. After coming to Taiwan in 1976, he would spend the remaining years of his life at a residence-studio that he named “Abode of Maya,” which is not far from the National Palace Museum.

Chang Dai-Chien’s early painting was strongly influenced by the Ming-Qing individualist artists Shitao (1642-1707) and Bada Shanren (1626-1707), but he also looked back to the Sui-Tang period and the Northern Wei of China’s past. In fact, Chang spent years studying the works of ancient masters, absorbing from them the essence of traditional brush and ink methods. In the end, he achieved excellence in the major techniques and subjects of Chinese painting, from landscapes to figures, birds-and-flowers, and animals. Learned and practiced in the art, he was moreover a keen connoisseur who offered astute insights into the history of Chinese painting. He is perhaps most famous, however, for developing a breathtaking manner of painting known as “splashed colors.” Taking traditional splashed ink into new territory, he created a style that would become a trademark of his art.

In calligraphy as well, Chang Dai-Chien excelled at copying various script types, fusing them into a highly individual and powerfully fresh manner that is a perfect complement to his versatile skill in painting. With a career as an artist spanning more than six decades and seemingly unlimited energy, a large number of his works survive today. Together, they testify to the great cultural heritage that Chang left behind for the world to admire.

What many people may not realize is that Chang Dai-Chien had a close relationship with the National Palace Museum. In accordance with Chang’s bequest, a large number of his precious artworks, along with the seals that he used, was donated to the collection of the Museum after his passing. At the same time, his Abode of Maya was presented as a memorial residence and is now managed by the Museum as well.

This year, 2019, marks the 120th anniversary of Chang Dai-chien’s birth. In commemoration, a selection from the finest works in the National Palace Museum collection and those temporarily entrusted from the National Museum of History of his painting and calligraphy, seals, and precious photographs have been made for this special exhibition. It offers a retrospective of the features and essence of Chang Dai-chien’s art from the early, middle, and late stages of his career, providing audiences with a comprehensive outline to the unparalleled legacy of this legendary master of modern times.