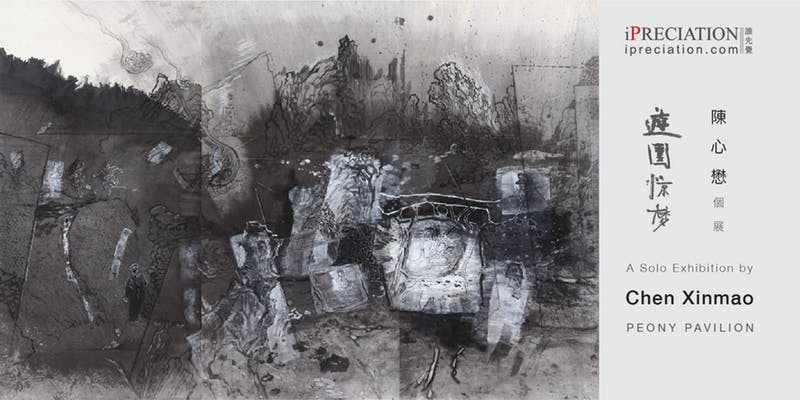 This exhibition showcases Chen’s recent body of works entitled “Peony Pavilion” inspired by China’s famous kunqu opera of the same name. Chen sought to create artworks based on the story to capture the essence of the “Chinese aesthetic,” which he believes is best represented by landscape painting, with the people in his depicted gardens symbolizing humankind.

Chen Xinmao 陳心懋 was born in Shanghai, China. Chen studied at the Art Department of Shanghai Theatre Academy for his bachelor’s degree and graduated in 1982. He later obtained his master’s degree from Nanjing University of the Arts in 1987. On top of practicing his artistic career, Chen is presently a Professor at East China Normal University, College of the Arts.

For more information on Peony Pavilion and Chen’s works, please contact us at (65) 6339 0678 or email us at [email protected]

Established in 1999, iPRECIATION is a fine art company that showcases the best of modern and contemporary Asian Art. As a herald of the visual arts, iPRECIATION is committed to putting forth platforms and propel significant and promising artists to the forefront through the successful staging of large-scale exhibitions.

Since its inception, iPRECIATION has given prominence to contemporary Asian art through the installation of quality artworks in public and commercial spaces not only in Singapore but also globally. iPRECIATION, with its proficiency in Chinese, South East Asian, and Singapore art, has complemented its gallery business with professional art consultancy services to both individuals and corporations.

The Living World Series by Ju Ming has become a permanent feature at two new modern office buildings, CapitaGreen building at 138 Market Street and The Metropolis business center at 9 North Buona Vista Drive. At CapitaGreen, a series of ten painted bronze sculptures depict the everyday man in their daily urban lives. At The Metropolis, the corporate environment is livened up with a cluster of twelve Gentlemen bronze sculptures. The Living World Series portrays a spectrum of social phenomenon departing from his iconic Taichi Series since the 1980s. In 2017, Lining Up, a set of ten life-sized sculptures from the Living World Series by Ju Ming has been permanently installed at the main entrance of the Hong Kong Cultural Centre portraying the lively spirit of people waiting eagerly to enter the center.

Ms. Helina Chan, the Managing Director of iPRECIATION, is the recipient of the coveted New Tourism Entrepreneur Award 2005 by Singapore Tourism Board, which recognizes the entrepreneur whose company has made major contributions to Singapore’s tourism industry. iPRECIATION aims to build an artistic foundation through its presentation of a diversity of small to large-scale exhibitions that meets the visual inclinations of its patrons; forming and nurturing a creative focal point in Asia, where individuals can convene and express their artistic sensibilities through art.