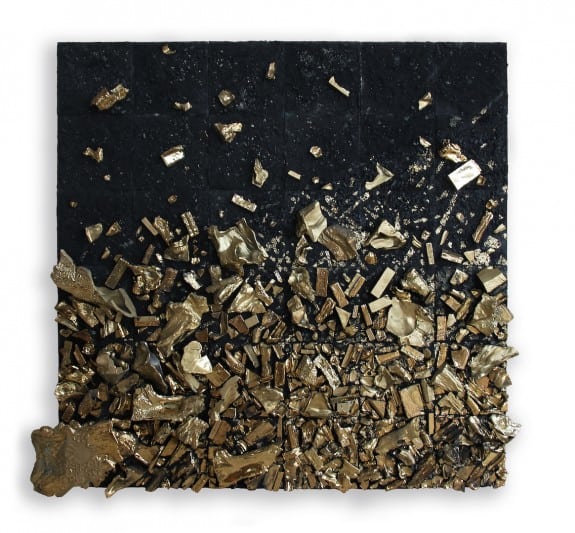 For the past two years, Drew lived in China and immersed himself in Chinese culture in order to create this profound, site-responsive new body of work. Building upon his interest in non-Western philosophies, Drew’s new corpus of sculptures offers insight into the artist’s diverse subjectivities, notably incorporating jagged, gold-plated shards of porcelain into the picture plane for the first time and developing compositions that appear more geological in their approach, as if reckoning with a spiritual and physical terrain of profound depth.

Whereas Drew’s earlier sculptures evoke qualities of urbanism in ruin, these new works feel spiritual, tectonic, and cosmic. If Drew’s work previously challenged viewers to question the cyclical nature of contemporary life, this exhibition encourages debate between the geologic and the modern, calling into question the transformation of matter.

Leonardo Drew was born in 1961 in Tallahassee, Florida and grew up in a public housing project in Bridgeport, Connecticut. He seemed bound to work as a professional artist from a young age. Drew’s works were exhibited publicly for the first time when he was only thirteen years old, and by fifteen he was being courted by both DC and Marvel Comics to work as an illustrator. However, Drew would apply his talents to a very different artistic path. He became inspired by abstract works, especially those of Jackson Pollock, and began to experiment for himself. He went on to attend the Parsons School of Design in New York and then earned a BFA from Cooper Union in 1985.

Drew’s works are always sculptural, although he tends to avoid making freestanding pieces. Instead, he will often mount objects onto panels or directly to the wall, which can be seen as a nod to his beginnings as a painter and draftsman. The materials he chooses are of particular importance. They often reflect memories of his days in the projects, sociopolitical issues related to his African-American ethnicity, or themes of death, darkness, and decay. His seminal work Number 8 features rope, animal hide, raccoon skull, and even a dead bird that all hang together, all painted black, creating a deep, dark, and brooding sculptural take on Pollock’s all-over drip painting. Although he sometimes uses found objects in his works, such as tree roots, Drew usually creates each piece with his own hands. For example, he will chemically induce rust on new pieces of metal in his studio.

Leonardo Drew’s works have also been collected by public and private collections, such as the Metropolitan Museum of Art, New York, USA; the Museum of Contemporary Art, Los Angeles, USA; the Tate, London, UK, and the Solomon R. Guggenheim Museum, New York, USA.

Founded by Pearl Lam, Pearl Lam Galleries is a driving force within Asia’s contemporary art scene. With over 20 years of experience exhibiting Asian and Western art and design, it is one of the leading and most established contemporary art galleries to be launched out of China.

Playing a vital role in stimulating international dialogue on Chinese and Asian contemporary art, the Galleries is dedicated to championing artists who re-evaluate and challenge perceptions of cultural practice from the region. The Galleries in Hong Kong, Shanghai, and Singapore collaborate with renowned curators, each presenting distinct programming from major solo exhibitions, special projects, and installations to conceptually rigorous group shows. Based on the philosophy of Chinese literati where art forms have no hierarchy, Pearl Lam Galleries is dedicated to breaking down boundaries between different disciplines, with a unique gallery model committed to encouraging cross-cultural exchange.

Further building on the Galleries’ commitment in Asia, Pearl Lam Galleries is delighted to announce the opening of its new gallery space in Singapore at Dempsey Hill in March 2019. The four gallery spaces of Pearl Lam Galleries in Hong Kong, Shanghai, and Singapore represent an increasingly influential roster of contemporary artists. Chinese artists Su Xiaobai and Zhu Jinshi, who synthesize Chinese sensibilities with an international visual language, are presented internationally with work now included in major private and public collections worldwide. The Galleries has also introduced leading international artists, such as Leonardo Drew, Jenny Holzer, Carlos Rolón/Dzine, and Yinka Shonibare MBE, to markets in the region, providing opportunities for new audiences in Asia to encounter their work. Pearl Lam Galleries encourages international artists to create new work which engages specifically with the region, collaborating to produce thought-provoking, culturally relevant work.