NTU – Tarek Atoui – The Ground – From the land to the sea 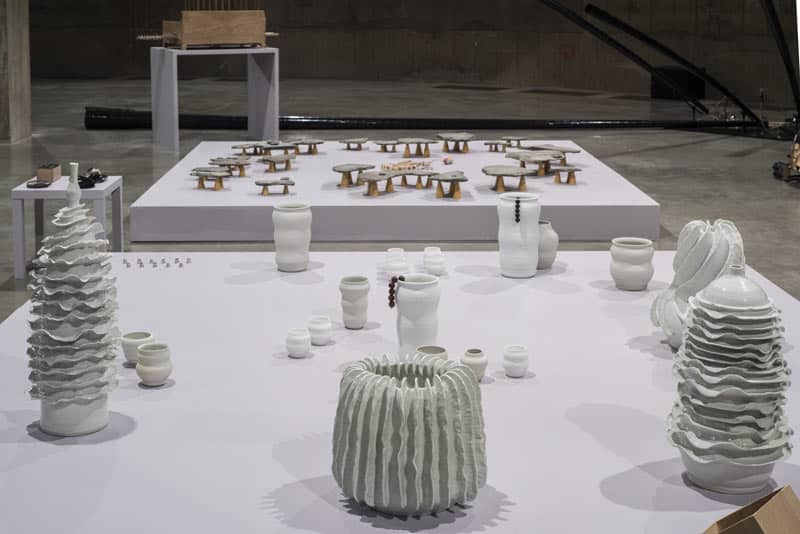 Opening Reception: Friday, 23 March 2018, 7.00–9.00pm
Special Performance by the artist during the opening at 8.00pm.
Guest of Honour: His Excellency Mr Marc Abensour, Ambassador of France to Singapore

NTU Centre for Contemporary Art Singapore (NTU CCA Singapore) is pleased to present the first solo exhibition in Southeast Asia by sound artist and composer Tarek Atoui, conceived as a composition that unfolds in space with its unique sound library and instruments. It is the first large-scale exhibition that Atoui has created through interweaving objects, instruments, and recordings, some borrowed from pre-existing projects, others newly collected and produced.

The Ground: From the Land to the Sea comprises two layers of auditory experiences that interact with each other as well as with the spatial and sonic qualities of NTU CCA Singapore’s exhibition hall, merging them into a single composition. Enveloping the main exhibition space are a set of speakers that play the sounds of underwater environments as well as human and industrial activities in the harbors of Athens and Abu Dhabi, recorded for the project I/E (2015–ongoing). Building upon the sound collection, Atoui has, as part of this presentation in Singapore, recorded at local harbors and waterfronts, together with composer and sound artist Éric La Casa.

The recording process in Singapore took Atoui and La Casa to a range of waterfront sites and islands including the Jurong Fishery Port, Pulau Sebarok (an oil storage facility and refueling port off the Southern coastline), on an oil tanker, and along the Singapore shores. During these trips, the duo picked out acoustic features of these environs, both underwater and on land, and captured them in their diverse forms—as vibrations, audible noise, and inaudible audio waves, etc.— using devices such as a recorder, a hydrophone, contact microphones, and selfmade omnidirectional microphones. Drawing reference to the emergence of acoustic ecology, which attempts to understand and analyze characteristics of sonic environments such as geological formations, organisms, and human interactions, Atoui’s auditory library is an artistic interpretation of the ecology of our times. Set within a “white cube,” the audience is transposed into an immersive audio-visual topography, becoming part of the installation.

Most of the instruments shown are part of The Ground project, the result of the artist’s five-year-long investigation of natural cycles in the Pearl River Delta, first presented at Mirrored Gardens, a project space in Guangzhou, China, in 2017. Also presented are instruments created for previous projects, such as The Reverse Collection (2014–16) and WITHIN (2012–13). This ensemble of unusual instruments is enriched with new additions, including a set of porcelain and ceramic discs, on which traditional Arabic rhythms are engraved, and a customized record player that rotates at irregular speeds, never reading a disc the same way twice.

At the core of Atoui’s practice lies an ongoing process of inviting composers, musicians, and artists to collaborate on his pieces in search of new ideas, gestures, and experiences. For the current exhibition, Atoui will engage with local and international musicians who will be invited to appropriate his composition and intervene in the exhibition space. He will work with acclaimed sound artists and musicians Vivian Wang and Yuen Chee Wai, as well as music curator Mark Wong, who in turn will invite other musicians and sound artists to inhabit the installation throughout the course of the exhibition.

Tarek Atoui (Lebanon/France) studied contemporary and electronic music at the French National Conservatory of Reims. He navigates between the vocabularies and aesthetics of the visual arts, performing arts, and music, redefining contemporary composition and sound production. In 2012, Atoui launched Serpentine Gallery’s Memory Marathon event in London with a five-hour performance that blended influences of traditional Arabic music with contemporary genres including electronic and hip-hop. He was the co-artistic director of the Bergen Assembly 2016, a triennial in Norway. Recent projects have taken place at the Tate Modern, London (2016); Fondation Louis Vuitton, Bois de Boulogne (2015); Bonniers Konsthall, Stockholm (2013); and Norbergfestival (2013). Selected exhibitions include Art or Sound, Fondazione Prada, Ca’ Corner della Regina, Venice (2014); Within, Sharjah Biennial 11 (2013); Metastable Circuit, la Lutherie, and Dimis Reconnected, dOCUMENTA 13, Kassel (2012). His work has been part of biennials including the Marrakech Biennale (2016); 8th Berlin Biennial (2014); 9th Biennale do Mercosul, Porto Alegre (2013); and the 9th and 11th Sharjah Biennial (2009/13).

Éric La Casa (France) has worked in the field of sound creation since the early 1990s through recording, record production, installation, radio, and various types of written publications. Through his aesthetic of capturing sound, his work fits equally into the fields of sound art and music, offering an interesting critical approach to the practice of sound landscape, and questioning our listening methods and schemes. He has recently examined the sound dimension of public spaces and the places in which we spend our private and domestic lives in the context of the project entitled Habiter, and the relation between waiting and listening in L’attente. La Casa collaborated with Tarek Atoui on recording the harbor of Abu Dhabi in 2017 and of Singapore in 2018 for the I/E project.

Vivian Wang (Singapore) diverged from her formal training as a classical pianist when she started the avant-rock outfit The Observatory in 2001. A former TV producer-presenter as well as a film music supervisor, Wang focuses solely on music, performance, and interdisciplinary work since 2008. She performs on synth, keyboard, voice, and percussion, and tags Alice Coltrane, Robert Wyatt, Mark Hollis, Bill Evans, and Annapurna Devi as her all-time favourite musical heroes.

Yuen Chee Wai (Singapore) is a musician, artist, designer, and curator. He is a founding member of FEN (Far East Network) and Project Director of the Asian Music Network, where he co-curates the annual Asian Meeting Festival in Japan. He is a member of the avant-rock band The Observatory, where he plays guitar, synth, and electronics.

Tarek Atoui has invited local and international musicians to engage with his exhibition and appropriate the installation for given periods of time. He worked with acclaimed sound artists and musicians Vivian Wang and Yuen Chee Wai, as well as music curator Mark Wong, who each will host three other musicians and sound artists. The guests will inhabit the exhibition and freely experiment with Atoui’s instruments throughout the course of the exhibition.

Schedule for upcoming Guest Musicians in the Exhibition Hall: