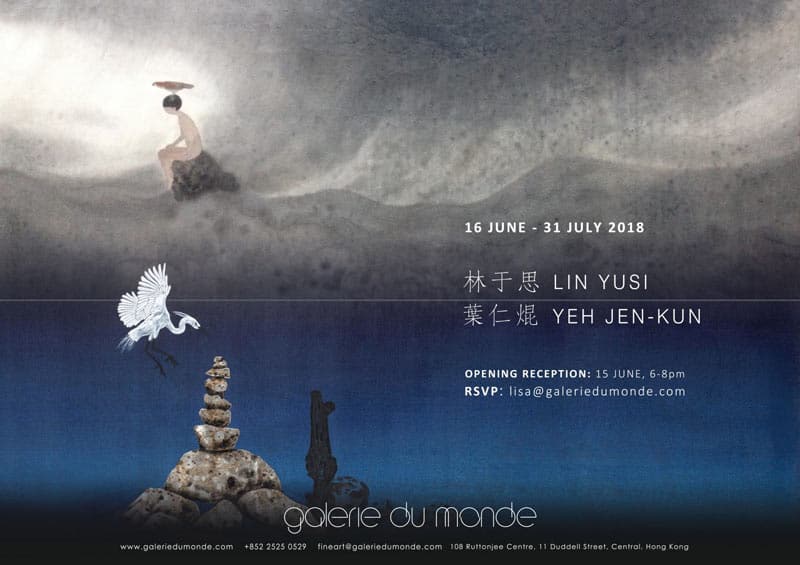 Lin Yusi is widely regarded as one of the most skillful young Chinese brush painters working today. Lin believes there are two governing principles to Chinese ink painting – an expression of the soul and great techniques, and integration of the two creates meaningful and exceptional works of art. He is fascinated with Chinese classical myths and literature such as Strange Tales (聊齋) and the Anecdotes about Spirits and Immortals (搜神記). Lin works predominantly on conceptual fable painting, using a combination of the meticulous ‘gong bi’ (工筆) and the freestyle “xie yi” (寫意) techniques to convey the traditional untraditionally. ‘Gong bi’ is a realist technique in Chinese painting that incorporates intricate details and vivid colors to portray narrative scenes, often featuring figures. “Xie yi” is also known as literati painting, which emphasizes the artist’s personal expression over accuracy and details.

The body of work showcased in this exhibition demonstrates Lin’s diversified expression of ink and his narrative of the relationship between humanity and nature. Lin’s landscapes carry traces of traditional painting style from the Song dynasty. Painting from the Song period was grounded in the Taoist philosophy that humans are tiny specks in a vast and greater cosmos. Observe the miniscule human and animal figures in comparison to the surrounding landscape, the proportion between the character and scenery in Lin’s paintings depicts the traditional Chinese view of mankind as small and insignificant in relation to the natural world, and the existential perspective of loneliness. Lin’s use of monotone ink, fine and freehand brushstrokes creates an ethereal and dream-like tone in his works, and he is skilled at capturing the light and negative space to create a strong composition.

In contrast to Lin Yusi’s exploration of humanity and nature, Yeh Jen-Kun delves into the relationship between humanity and the urban city, a man-made world. People often associate a metropolis with tall buildings, mass transit and busy sidewalks but Yeh depicts the city as an uncanny lost space. The ‘uncanny’ is a Freudian concept – a psychological experience that locates the strangeness of the familiar, confronting the subject with the unconscious, repressed desire. Since 2008, Yeh began to create a series of landscape paintings that evoke memories of a city based on what lives in his mind through reconstructing and assembling. In the process, Yeh painstakingly excavates pieces of memories that connect self and space. The ruin-like cement structures in Yeh’s works respond to the desolate spaces that have been neglected in real life. Yeh’s paintings exude a subtle surrealistic and dream-like ambiance. Yeh does not deliberately refer to any time or space, yet his works retain a sense of familiarity to viewers.

Yeh’s ways of creating are never bound by conventional techniques. He is one of the leading artists to experiment with Eastern gouache in Taiwan and believes the medium and textures are as important as the strong visual presence that governs his works. In the body of work featured in this exhibition, he has fused techniques of traditional ink and wash paintings with gouache and silver foil, to project the emotions he experiences in this contemporary society. Yeh expresses the feelings of alienation, frigidness and solitude through the concrete-like greys and the deep and dark blues in his paintings. Sharp lines, heavy shades of blue and omnipresent concrete structures are dominating elements that make his works readily recognizable.

“Lin Yusi and Yeh Jen-Kun are part of a new generation of ink artists that address the intellectual and cultural issues of contemporary society through a new pictorial language, exploring the traditional Chinese artistic language with new art forms and mediums. Galerie du Monde is delighted to collaborate with these emerging young artists and host their first exhibition in Hong Kong.”