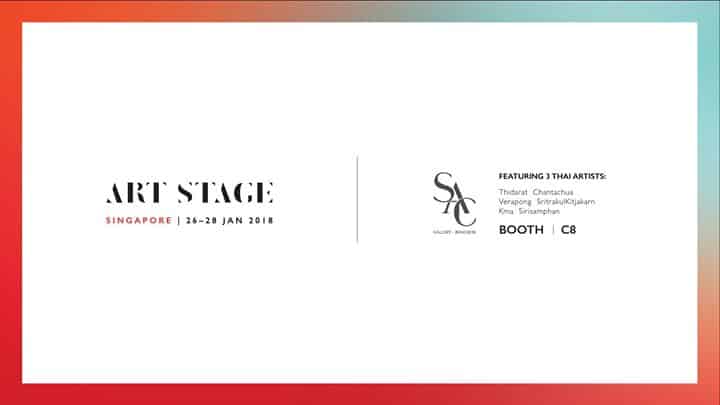 Thidarat Chantachua’s mixed media works take visual cues and foundations from Islamic arts that are often characterised by geometrical patterns. Each thread in Thidarat Chantachua’s work is meticulously sewn on to a dark-coloured fabric, typically used to make robes for religious purposes.

Verapong SritrakulKitjakarn humbly compared his new series to “a speck of dust in a chronicle record” of the world history, it consists of paintings that were painted in swift strokes, expressively represent what the artist felt at the time of conception. Sritrakul’s works are characteristic for his powerful concepts and highly skilled craftmanship without having to draft nor sketch beforehand. Every inch of a work is a chronicle record by the artist of different eras that are strung together through his memories.

In the past few decades, Kma Sirisamphan has constantly spoken to himself through his works, transforming his feelings for everything into his creative energy for each artwork. The whole series is from his own and others’ life experience, pulling from his perceptions of dealing with growth, success and failure, seeking for the value of life.

Inspiration: The artist is interested in social change which affects nature and environment. However, most importantly humans have been internally and externally affected by one change, the arrival of capitalism. Coming from being an agricultural society believing that nature is life and gives life we know that our life depends on it. On the other hand, capitalism looks at nature as a raw material which needs to be managed and controlled. Whoever owns more of it, is a king. This change removes the way of life as well as beliefs from society completely.

Being a refugee, you are unsettled and uprooted. You broke your links with the land and have been forcibly moved off or have fled violence and poverty. You are in motion, stumbling along your pathway but nothing is moving through and your life comes to a stop. Your family has been broken apart and your life has been fragmented. Whatever beautiful boring moments of the ordinary everyday life you had have now passed. Life has become too fragile and too uncertain and your place in the world has become that of an object. You can no longer count on anything as nations rush to shut their borders to you. Seeking peace and asylum you are barred and you become an “intruder”. You are out of place without a choice. Growing up in close communities and watching as they are bulldozed and erased from the map. This will be your tent where you and your family will live, if you can manage to survive the lack of food, dehydration, and illness. Politicians will use these tents as evidence of disorder and as symbols of distrust.

Thidarat Chantachua’s mixed media works take visual cues and foundations from Islamic arts that are often characterised by geometrical patterns. Each thread in Thidarat Chantachua’s work is meticulously sewn on to a dark-coloured fabric, typically used to make robes for religious purposes. The sewn threads glow in the dark, much like the stars across an open night sky which guide lost travellers. The reassuring presence of the stars is fleeting however as their glow tapers off and disappears. The loss of the guiding stars represents the uncertain future for refugees worldwide. The tents tight space feels constricting and challenges one to imagine living there indefinitely. The atmosphere is claustrophobic but yet also vulnerable. For some people this will be temporary, for others, where they will spend decades of their lives. The paths the people have travelled, the lines of strings, draw the eyes from one point to another creating depth and illusion. This is the artist’s way of guiding the audience eyes along the winding paths of the human migrations. The artist greatly believes that through her creations of architectural patterns and repetitions of forms and lines a mental peace can be established.

Thidarat Chantachua holds a Bachelor of Arts degree and is currently studying at the Master of Arts in Fine Art program at Silpakorn University. Chantachua is a Thai artist that has successfully conveyed her artistic ideas despite limitations in techniques and beliefs and has gained acceptance with broad audience. She had consistently won awards and honours and is recently selected to join artist residency program at the Fukuoka Asian Art Museum in Japan.

Verapong SritrakulKitjakarn has had experience in exhibiting in local and international venues over hundred times from 2002 until present. Aside from winning a national prize and showing his works in Thailand, Sritrakul has shown his works in many countries such as Korea, Japan, Romania, Italy, Poland, Greece, Germany, France, Malaysia, Egypt, USA, Spain, Singapore, Belgium, Portugal, Turkey, Taiwan, Bulgaria, Laos, Vietnam, Czech Republic and Macedonia.

By sharing this experience, Kma Sirisamphan encourages the public to contemplate their own life experiences.“In my opinion, there is the responsibility as the artist to not only create aesthetic works but to also remind people to be mindful through my works.”