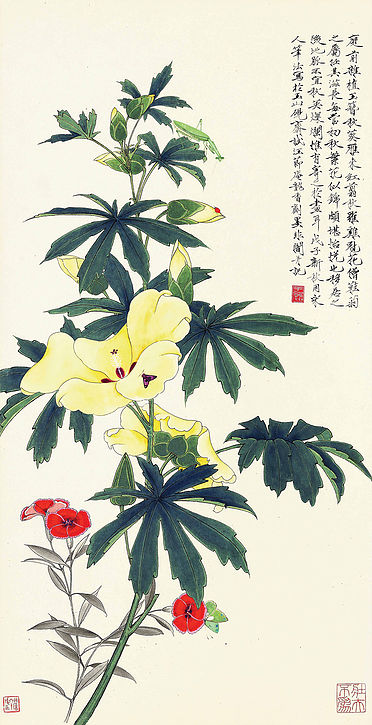 With this theme, the exhibition showcases some 50 pieces of paintings selected from the Yitao Collection. They are from the “Four Monks” of the early Qing Dynasty including Bada Shanren and Shitao, advocates of the reformation of Chinese painting in the first half of the twentieth century such as Gao Jianfu and Xu Beihong, and celebrated masters who made remarkable breakthroughs within a tradition such as Qi Baishi and Zhang Daqian. Altogether, 22 artists are featured in this exhibition. They delivered different beautiful dreams in their paintings to invite the audience to indulge in.

Traditionally, Chinese painting depicts real life. However, Chinese artists do not treat painting as a faithful visual record. They paint real life only partially and selectively, modifying what they see or rearranging the position of different elements to deliver their ideal state of life.

In figure painting, the background is often left blank or features a virtual setting. For example, a figure may be placed next to a waterfall and flowing stream against a background of mountains and trees. The natural setting carries embodied meanings, endowing the figure with an aura of moral loftiness, an ideal state pursued by the literati.

In bird-and-flower painting, plants and animals that carry auspicious meanings are mixed together with exquisite artificial rocks and mountains. It goes against reality to have seasonal flowers of all the seasons: spring, summer, autumn, and winter included in one single painting. But such a painting is desired for its meaning of all-season prosperity.

As for landscape painting, there are two major composition formats. The most common one consists of three layers: the lowest layer is made up of land, the middle one shows trees and houses while the uppermost one features mountains. The other format divides the painting into two halves: trees, rocks, and houses are erected on one side while towering mountains are on the other side. The blank space in between stands for clouds, mist or water. In essence, each of these representations is carefully crafted to portray what the artist regards as beautiful nature.

Employing these techniques, the artists construct special compositions to convey meanings and feelings. Their paintings may not reflect what they see but definitely reveal what they think. Sadly, their thoughts do not always get realized. Like dreams, they are trapped between fantasy and reality. Certainly, every single artist wishes that their dreams would come true.

Literati painting was the dominant trend in the Ming-Qing dynasties when artists displayed their virtues to prove that they are a cut above their fellow people. In the first half of the twentieth century, the country was embroiled in chaos and people bore sufferings. Artists yenned for a stronger nation and better life and illustrated such wishes in their paintings.

Chinese painting is therefore based on real life to express an artist’s thoughts and feelings. Artists portray a world
more enchanting and delightful than reality, blending techniques, themes and embodied meanings into a single piece of artwork that is beautiful in both appearance and spirit. Such is the essence of Chinese painting. In a nutshell, Chinese painting is expressive; indulging the artists and viewers in beautifully painted dreams.

12 April 2019 – 13 July 2019
Tuesday to Saturday: 10 a.m. – 6 p.m.
Closed: Sundays, Mondays and public holidays
Guided tours are available in Cantonese, English, and Mandarin at specific times, and by appointment only
The guided tour will only be provided when there are at least 2 participants
The exhibition will be temporarily closed from 3 p.m. – 5 p.m. on 13 April and 27 July due to cultural lectures.