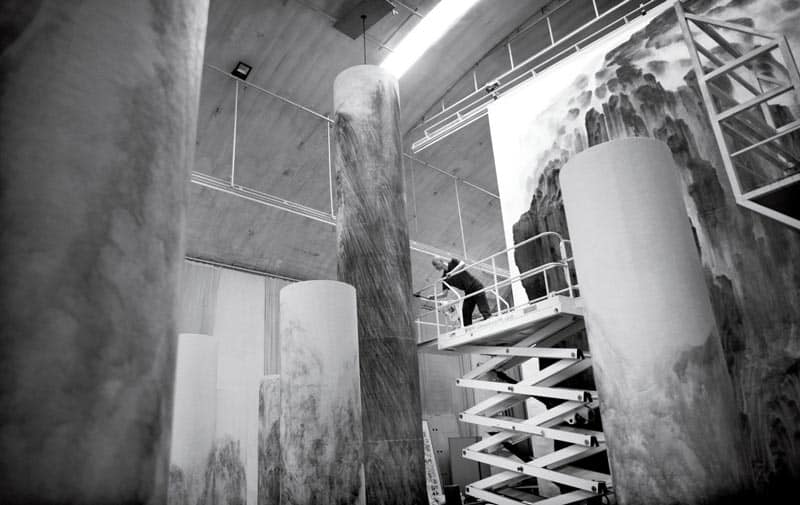 Hanart TZ Gallery is honoured to present Xu Longsen’s latest solo exhibition, Mountains in the Clouds. The opening reception will take place in the presence of the artist on Friday, 25 May 2018, from 6-8pm, at Hanart TZ Gallery.

Running concurrently with Xu Longsen’s groundbreaking overseas solo exhibition Light of Heaven, presented by the prestigious Art Institute of Chicago (March through June 2018), Mountains in the Clouds at Hanart TZ Gallery will showcase Xu’s most important works of his recent oeuvre, including the monumental installation Shanshui Totem. Comprised of massive ‘landscape pillars’ measuring over three metres high, Xu’s artwork acts as its own intervention in the gallery space, conjuring a spiritual landscape through which one can ‘leisurely wander’.

Xu Longsen’s key contribution to the evolution of landscape painting is his own concept of ‘monumental ink landscape painting,’ which is both deeply immersed in the Chinese monumental panting tradition, and yet at the same time brings to it a completely contemporary language, representing the artist’s own methodology of fusing the traditional and the contemporary. Most significant in this methodology is the way in which the artist brings about a fundamental change in the form and connotation of brushwork. His monumental landscapes conjure a breathtaking, almost overwhelming sense of vastness and grandeur, boldly drawing out a fresh and contemporary spirit from within the still-evolving heart of the landscape tradition, and simultaneously breaking out of the spatial boundaries of that tradition. In this way Xu also creates a new kind of challenge to the confines of the exhibition hall, and a means of breaking through them. Xu Longsen is truly a pioneer, opening up new spaces and new vistas for Chinese landscape art.

Together with Shanshui Totem and a select group of Xu’s monumental landscape paintings, Mountains in the Clouds also marks the Hong Kong debut of Xu’s new group of semi-abstract works, Flower Series, completed just this year, in which the artist explores further experimental breakthroughs in the style, technique and language of ink painting.

Xu Longsen’s art underscores the continued relevance of shanshui (Chinese ink landscape) painting in the contemporary world, and the monumentality and layered delicacy of his vistas offer a new realm of encounter for a contemporary audience.

Xu Longsen’s landscapes challenge the monumentality of modern architecture with their imposing presences. His monumental installations, recently shown at the Museum of Roman Civilization in Italy (2011) and the Palace of Justice in Belgium (2009), astonished viewers with their breathtaking effects that seem to challenge the edifices of architecture with natural peaks that burst through the confines of manmade space. The sublimity hinted at by Chinese classical landscapes here manifests itself in physical presence.

Xu’s art is both a radical departure from, and an homage to, the past. His position within the lineage of this important tradition was recognized in the invitation by the Nelson-Atkins Museum of Art in 2013 when he was invited to exhibit his immense horizontal landscape together with the museum’s famous collection of masterwork paintings from the 10th to 18th century.

This year, the prestigious Art Institute of Chicago is presenting Xu Longsen’s solo exhibition Light of Heaven (March through June 2018), marking the first time the Art Institute has presented an exhibition of contemporary ink painting. Xu’s massive installation consists of a set of pillars molded from felt and painted with layers of ink wash, along with a number of breathtaking landscape paintings—all inspired by the mythological Mount Kunlun, home to many Chinese gods and goddesses. With this site-specific installation, Xu again creates an impressive dialogue with the architecture of the site of display, evoking a sense of aesthetic and physical fusion.

Xu Longsen was born in Shanghai in 1956, and graduated from the Shanghai Arts and Crafts College in 1976. He currently lives in Beijing.

In an era dominated by the ubiquitous visual image, Chinese ink landscape painting, or shanshui (lit. ‘mountains and water’) has become virtually submerged within the visual torrent. Within the categorizations of art history, shanshui painting has been preserved as images, and relegated to a chronology of visual imagery. Fortunately, the cumulative cultural and aesthetic effect of shanshui art on the Chinese mind has created a kind of numinous imprint on the collective memory, so that even today, when people wander amidst the wilderness of the deep mountains, they are often astonished by a sense of re-encounter, giving rise to the realization of the true essence of shanshui as an experience that transcends the visual image.

The quest to discover elements within the history of shanshui painting that can resonate with the sensibility of the contemporary viewer requires not only an unpacking of history, but also of our contemporary perspective and experience of the world. Xu Longsen’s large-scale paintings confront his audience with astonishing vistas of ineffable monumentality, creating a new realm of encounter. In both volume and image, they bring to the fore qualities of vastness, grandeur, and mystery. One feels enveloped by the realm of ‘mountain and water’, and permeated by the atmosphere of the sublime, the ancient and the primal, an experience which is the core of the shanshui painting tradition.

The question then arises, what are the critical elements that allow shanshui painting today to communicate its spirit to the modern audience? Or perhaps, to phrase it another way: given that we are living in an anthropocene age, how should a contemporary shanshui artist depict a landscape? Ours is an era in which the competition between man and nature has led not only to an imbalanced earth and an altered ecosystem, but even more critically, to a profound and fundamental change in modern man’s attitude towards nature. The awe we once felt for the power of nature has given way to an attitude in which the cosmos itself has been objectified.

If the spirit of shanshui has any function in today’s world, then it would be both to challenge and enlighten modern man’s view of nature. The first aspect of this enlightenment would be to open up our understanding of time-space, moving away from the abstract rationalist approach towards an altogether different way of experiencing life on earth. Shanshui should be understood as a cosmic message revealed by the world to humanity; it is an experiential ‘realm’ created jointly by the cosmos and mankind, hence a worldview. ‘Shanshui painting’ is the body of technique that has been developed to articulate this knowledge.

In terms of the way of observing the world, the science of perspective performs an autopsy on time-space. Certainly in the centuries following the invention of perspective, the history of art has been marked by a number of revolutions, particularly in modern times. Yet the fundamental question posed by perspective remains: how do I accurately perceive the world? The shanshui tradition has its own distinctive approach to perception: the so-called ‘distance method’ (yuanfa), primarily divided into the ‘three distances’ (sanyuan) of ‘high distance’ (gaoyuan), ‘deep distance’ (shenyuan) and ‘level distance’ (pingyuan). ‘Distance method’ primarily analyzes the relationship of man to nature, focusing on interdependence of man and nature in the creation of yijing—the ‘aesthetic realm’ or ‘realm of artistic conception’. The ‘distance method’ of shanshui art points to an implicit question that differs from that posed by Western perspective: How does the world see me?

Asking the question ‘How am I seen’ indicates casting aside the primacy of the self, because the heart of nature can only be glimpsed in a realm that is neither reality nor illusion. At the core of shanshui theory has always been the belief that one can only come to understand nature through the ‘heart-mind’ (xin); and it is in this way that the ‘heart-mind’ of man can commune with the ‘heart-mind’ of the cosmos.

Xu Longsen’s intention is to return to the archetypal spirit of Five Dynasties and Song period shanshui painting, and to carry forward into the modern era essential elements of the philosophical and aesthetic sensibility of that period. On a physical level, the sheer size and volume of Xu Longsen’s shanshui paintings serve to expand the position that ‘mountains are greater than man’ (shan da yu ren). On the technical level, Xu extends the history of shanshui painting by using his mastery of traditional inkplay to create imagery that is both deeply resonant with the vision of shanshui rooted in the Chinese consciousness, and yet that also speaks to a contemporary sensibility. Xu views the era in which shanshui technique first matured (that is, between the 10th and 13th centuries) as a time when there was an organic unity of felt experience and artistic expression, and when the essence of shanshui was revealed to the artist through his encounters with nature. Xu Longsen seeks to re-enter this world of direct encounter with nature, no matter whether what is revealed is sublime, wild, primordial, or perhaps even the immanence present in the chaos of creation.

Although the concerns of the viewer are different from those of the artist, in shanshui painting the requirement of seeing with the heart-mind is the same for both. In his landscapes, Xu Longsen seeks to create a spiritual-aesthetic realm in which lofty mountains viewed from a ‘high distance’ open a window into the primordial and eternal. Technically Xu Longsen’s approach is to privilege ‘high distance’ within the three distances schema, and by emphasizing inkplay in his brushwork—using water to ‘break up’ the rich masses of ink into texture and form.

Thus one can say that Xu’s brushplay is sublimated within his inkplay, which emphasizes the primordial richness of form. The way he builds his mountains is essentially sculptural, eschewing classic methods of delineating landscape through the addition of trees and plants or the use of texture strokes (cunfa). Rather, the textural effects of cunfa and the spirited movements of brushwork are contained within the physical construction of Xu’s mountain forms: thus his landscapes are largely devoid of the intricate details found in the close-up mountain views, revealing only a layered monumentality visible through distant views. The artist’s layers of ink wash provide an entryway into the inner structure of the mountains: up close we find intimations of form in the time before form began, and at a distance is revealed the stillness and solemn grandeur of the mountains. These lofty mountains and unending waters occupy a realm that is remote from the concerns of the everyday world. These mountain ranges seem to hover and shift between the concrete and the ephemeral, between form and non-form. All that the painting surface reveals is the movement and rhythm of forces both ancient and timeless.

68th year of the People’s Republic