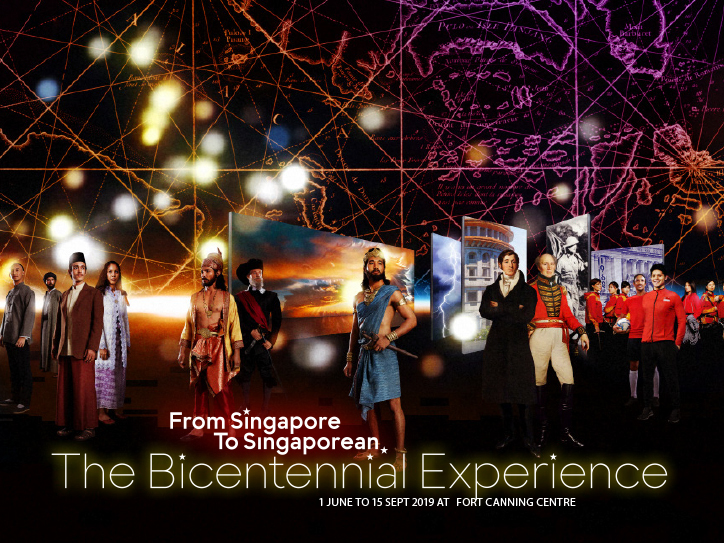 From Singapore to Singaporean: The Bicentennial Experience

As the centerpiece event of the Singapore Bicentennial, this multimedia sensory experience brings you back in time to witness key moments in Singapore’s transformation from as far back as 1299.

Reserve your tickets today for this one-of-a-kind showcase

From Singapore to Singaporean: The Bicentennial Experience brings to life Singapore’s momentous evolution from 1299, shaped by wider regional and global shifts. It comprises an immersive, cinematic ticketed experience within the Fort Canning Centre, and a free and easy exploration through interactive pavilions within the greenery of Fort Gate.

Experience 700 years in an hour at the Fort Canning Centre. Travel back in time through a powerful, multimedia sensory programme that puts you at the heart of Singapore’s history.

An interactive, thought-provoking series of pavilions situated at the Fort Gate. Here, you can explore Singapore’s evolution from past to present at your own pace.

Enjoy a front-row view of Singapore’s 700-year history. Experience first-hand the sights, sounds, and drama of formative events throughout our evolution. This segment is a timed experience that will last 60 minutes.

In her early days, Singapura was a thriving maritime emporium under the rule of Sang Nila Utama and his successors. Being connected to the region brought Singapore waves of fortune and prosperity, but it also put her at the center of regional disruptions.

Through it all, Singapore evolves – from being the seat of the Kingdom of Singapura in the 14th century, to how her fall gave rise to the Melaka Sultanate in the 15th century, and eventually, as naval base and gateway to the Johor Sultanate in the 17th century.
Time Traveller Act 2, Artist’s Impression

The arrival of the British in 1819 marked a new trajectory for Singapore as it evolves once again, this time into a colonial port linking Singapore’s trade not only with the region but also with Europe. The absence of port duties and new economic opportunities attracted waves of migrants who flocked to the newly-opened port, turning Singapore into a more cosmopolitan town.
Time Traveller Act 3, Artist’s Impression

The long 19th century saw to Singapore evolving further into a bustling metropolis. It witnessed the emergence of new technological inventions, expansion of physical infrastructure and industries, as well as the proliferation of new ideas of identity and belonging.

However, beneath these glitzy developments were grim realities, especially for those of the laboring masses who had to contend with a whole range of social ills. These prompted prominent members of the various communities to step forward in attempts to address these issues.
Time Traveller Act 4, Artist’s Impression

Life in the city of Singapore came to a standstill with the outbreak of World War II in 1942. The British surrender of Singapore and the ensuing occupation between the years 1942 to 1945 made the people of Singapore not only realize the dangers of dependency but also prompted them to seek ways to chart their own destiny and renegotiate their relationship to the island they have called home.
Time Traveller Act 5, Artist’s Impression

With a recap of scenes from previous Acts, journey through the story of how our nation emerged through the contribution of ordinary people.

The Pathfinder is a series of pavilions where we experience our 700-year old history through space. It takes the visitor through Singapore’s place in the world across the centuries by using artifacts, maps, flora, and the written word. This is a free and easy exploration which will take approximately 30 minutes or more.

Emporium of the East

This space simulates Singapore as an Emporium of the East between the 14th to the 16th century, featuring replicas of trading goods that were found in Singapore and the surrounding region in this period.
Visitors can access information on our historical connection to the region’s culture and trade.

The House of Maps is a showcase of maps that show the evolution of the marking of Singapore’s place in the world across time, as well as its different names throughout history.
The kinetic façade of smaller cartographic volumes responds to the wind, which symbolizes the power of the element that has influenced much of maritime history in this region for the past 700 years.

The Seed Conservatory features the historical flora of Singapore over the last 700 years. This pavilion features native plants, alongside those which were brought to the island either by forces of nature or to be cultivated for aesthetic as well as economic reasons.

The Lookout consists of three telescopes that showcase how the sea has been a key constant in Singapore’s history as it changes over the centuries.

Reflections of Our Past

Reflections of Our Past is a space for visitors to pause and ponder on their experiences and stories of the Bicentennial.

In the day, the Lightbeam is a sculptural feature of mirrors. When night falls, a beam will shine from the center of the Pathfinder in three colors – each representing one of the