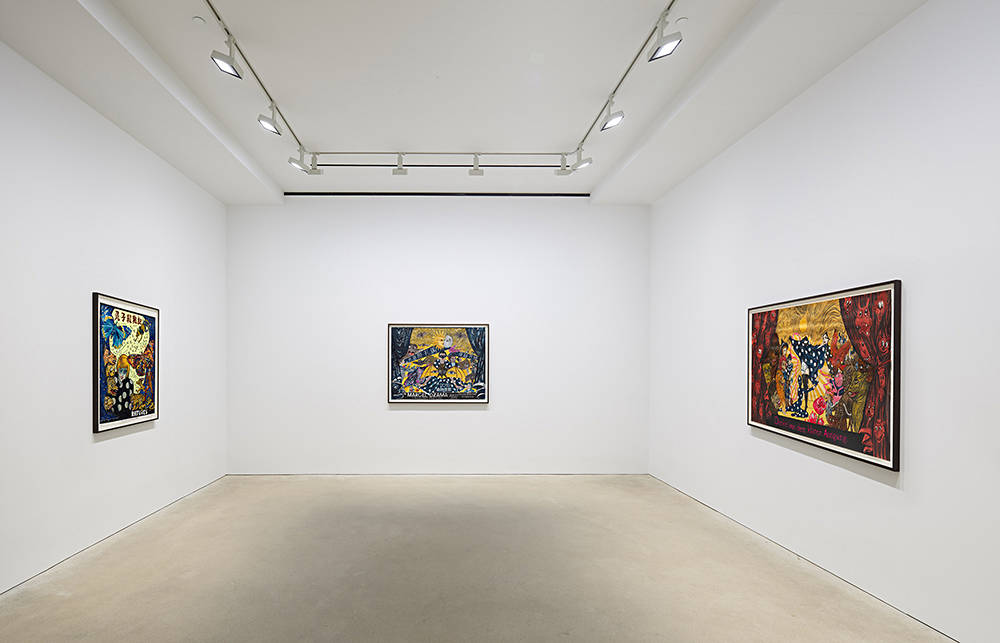 Since rising to prominence in the late 1990s, Dzama has developed an immediately recognizable visual language that investigates human action and motivation, as well as the blurred relationship between the real and the subconscious. Drawing equally from folk vernacular as from art-historical and contemporary influences, Dzama’s work visualizes a universe of childhood fantasies and otherworldly fairy tales.

Spanning the two floors of the gallery, the works on view explore imagery inspired by the artist’s recent trip to Hong Kong, while also reinvigorating a range of fantastical motifs that Dzama has investigated throughout his oeuvre. Here, the artist combines elements from the theater and carnival with those of warfare and conflict to create a singular vision, both playful and dark. He develops a world that mirrors our own where life and death, calm and violence can coexist and where allusions to artistic movements including Dada and Surrealism are depicted alongside commentary on present social and political issues.

Chess is a recurring motif for the artist who finds inspiration in its intricate balance between improvisation and predetermination. While the game serves as an underlying theme in many of his new drawings and dioramas, Dzama’s new film, entitled Dance Floor Dracula, Prelude in C-Sharp Minor, more directly centers on a whimsical chess game that takes the form of a ballet, featuring collaborators Amy Sedaris as Marcel Dzama and Raymond Pettibon at David Zwirner. By using chess as a structural device, the artist makes reference to the early twentieth-century avant-garde artists Marcel Duchamp and Francis Picabia, who employed the game’s special set of rules and moves in their work as metaphors for larger questions regarding free will, chance, and strategy. Integrating this artistic precedent with a subtle, more contemporary nod to the two-party political system in the United States, Dzama’s new works are simultaneously familiar and mysterious, humorous and intense, chaotic and orderly.

Many of the works in the exhibition feature text in different languages and from various sources, allowing Dzama the opportunity to play with meaning and experiment with composition. For example, a group of works on paper that each depict a single masked figure incorporates song titles related to themes of love and longing taken from 1960s album covers of Hong Kong singer Margaret Lee and Taiwanese singer Yao Su Rong that the artist discovered during his travels.

Additional influences for the artist’s works on paper range from found Hong Kong horse-racing leaflets to 1960s and 1970s dance magazines. In the vibrant and dense drawings that populate the majority of the gallery space, characters from myths, comic books, and television appear next to nineteenth-century soldiers and invented animals and insects, often covering the expanse of the paper as if it were a stage.

A large drawing on view, As it all falls away, my love and I will ride away (2018), takes horse racing as its subject, inspired by Dzama’s experiences at the Winnipeg racetracks growing up and his exposure to the sport while visiting Hong Kong in early 2018. Two competing jockeys on galloping horses rush toward the viewer as a unique cast of animals looks on. A cluster of bats circle above, a Cheshire cat emerges from the smoke, and a pair of wolves saunter across the track, all awaiting the result of the race.

Dzama’s references are at times more explicitly fantastical, such as in the drawing Dance me till the end of the world (2018). Dense clouds loom above in the work as a fictional monster with wide eyes and bared teeth wraps its sharp claws around one of the three women dancing in the foreground. Striking dynamic poses and clad in polka-dotted costumes with capes that echo bat wings, these figures recall Francis Picabia’s 1924 ballet Relâche—a reference that reaches across all of the drawings presented.

Other works on view play on art-historical precedents spanning from the eighteenth century to the post–World War II era, including imagery reminiscent of the skeletal and carnivalesque figures of James Ensor; the supernatural and mischievous characters of Francisco de Goya; the political performances of Joseph Beuys; and the dark, phantasmagorical work of William Blake. Seen together, the range of works in the exhibition underscores Dzama’s ceaseless examination of fantasy, art history, and pop culture as he continues to develop an aesthetic vocabulary that is at once universal and uniquely personal.