Art Porters Gallery – Aiman – The evolution of Eian and Eien 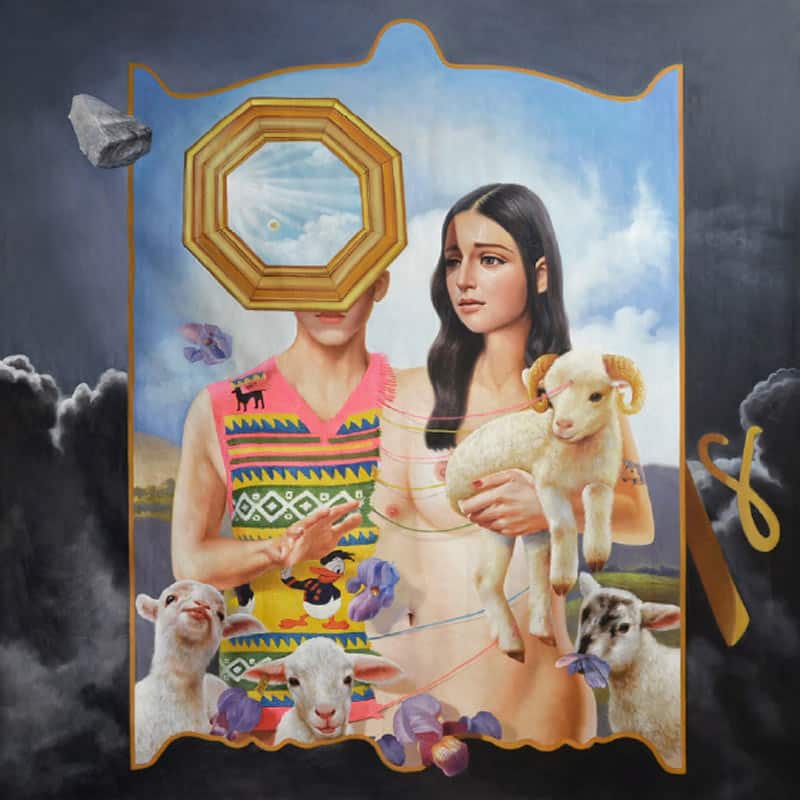 Aiman’s Solo Exhibition Opens 16 May 2018 Art Porters Gallery is delighted to present Aiman’s second solo exhibition, The Evolution of Eian & Eien – an exhibition meant to challenge preconceived boundaries of the evolutionary process, and expand our perception of normalcy. The exhibition will present a total of eight large-scale paintings from Aiman, a series that will display his maturity and confidence as a visual artist, demonstrating his superb understanding of visual concepts.

Have a glimpse into Aiman’s fantasy world as we introduce three works of the series, namely, The Triumph of Ariadne, Chapter 1 Eian and Chapter 2 Eien. In The Triumph of Ariadne we witness the heroine’s tragic betrayal by Theseus and her victorious rebirth. Featured as a red-haired siren, she has dropped a ball of red thread, which epitomizes her intuition, trust, and commitment. In the diptych Chapter 1 Eian and Chapter 2 Eien, using the figures of conjoined twins, Aiman explores the narrative between the hidden identity of the private individual and the fleeting nature of public fame as it relates to social media. Other works in the series illustrate an evolutionary process encompassing interracial life forms, gender neutrality and duality. All of these themes convey the need to embrace a self-reflective journey to achieve a higher emotional intelligence through the radical acceptance of all emotions, both positive and negative to build resilience and to live an authentic life.

“The exhibition is very much a reflection of modern day society, layered with the illusive imagery of dreams, Greek mythology and religious iconography. I hope the viewers resonate with the artworks, and the themes of identity, love, and triumph beyond tragedy.” – Aiman, artist

“I’ve been collecting and following Aiman for 10 years now. He is evolving into one of the most Singaporean important painters of his generation and I am excited to be showcasing his new series in the gallery”, said Guillaume Levy-Lambert, co-founder of The MaGMA Collection and Art Porters Gallery.

“We are now confronted by large scale paintings that reveal Aiman’s maturation and confidence as a visual artist with works that demonstrate his superb understanding of visual concepts”, said Ernest Chan, lecturer and mentor to Aiman.

Obsessed with a dreamlike world, Aiman’s paintings aim to ignore realism and artistic conventions, blurring the lines between high art and low art. The universe in his make-believe world favours grace, sensuality and esotericism; staging mysterious icons, glorified, eroticised, divinised to the point that they integrate popular imagery. In this enchanted world, his subjects are born with the power of anti-gravity, and as this gift is slowly cycled back into the universe; symbolised through the use of flowers, energy is exchanged as they slowly ground themselves, to the possibility of a destination or the start of a new chapter. The story of these figures is told in a fairytale fashion, with both tenderness and cruelty, often interweaved with references of religious iconography, eroticism, mythology and children’s tales. Aiman graduated from LASALLE College of the Arts in 2004 with a Diploma in Fine Arts. Awards he has won include the LASALLE-SIA Scholarship, the Georgette Chen Scholarship, and the Winston Oh Travel Award. Aiman has exhibited both in Singapore and overseas, including at the National Art Gallery of Malaysia and the Sunshine International Museum, in Songzhuang, China. His works are included in prominent local and international collections including the MaGMA Collection.

Art Porters Gallery believes in the unique power of art in transforming lives. Rooted in the founder’s personal experience with a life-changing masterpiece, the gallery’s mission in “sharing happiness with art” was born. Art Porters Gallery is housed in a charming Peranakan shophouse in one of the quaintest neighbourhoods of Singapore. The gallery’s work focuses on contemporary art and develops privileged relationships with international artists, whose works are presented in various forms of media including drawing, painting, sculpture, photography, and digital animation. The gallery also provides art consultancy services for various corporations, and hosts events for a wide variety of clients.