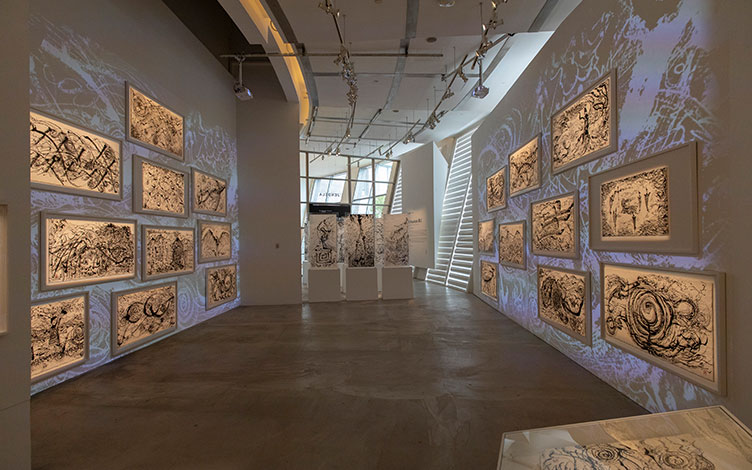 Ink Mountain 墨山 is Mark Chan’s personal and unique vision of the world where his paintings and calligraphy in Chinese brush and ink on distressed paper take center stage. Typified by bold calligraphic strokes combined with personal, idiosyncratic techniques that break out of the strictures of traditional ink painting, Chan has fashioned a world and language of his own. This is a world inhabited by rich mythology: creatures and spirits and a modern blend of abstractions that glyph, glide and splatter suddenly into recognizable forms and figures.

Chan collaborates with Brian Gothong Tan whose video works will reveal new layers and perspectives of Chan’s paintings. The gallery is transformed into a Sanctuary where the viewer can escape from the world outside. A compelling narrative thread runs through this immersive installation which has a deep connection to primitive roots, ancient mythology and the complex history and character of Southeast Asia.

In conjunction with the Singapore Bicentennial.

Mark Chan is a composer, lyricist, librettist, poet, painter, singer, songwriter, multi-instrumentalist and author. Prior to his full-time pursuit of music and the arts, Chan was a distinguished national swimmer, competing and winning awards in national, regional and international sporting events.

As an artist, Chan’s practice transcends boundaries that span genres, crosses art forms, combines worldly and spiritual influences, East and West, old and new. Whether in pop or music-centered theatre projects, Chan’s work is inherently infused with deep spirituality and an intuitive understanding of diverse musical cultures. Seeking to discover the elements that unite rather than dividing the world we live in, Chan’s unifying sensibility creates work that is seamless, original, powerful and popular.

At every step of his career, Chan has been a pioneer. He was part of Singapore’s early years in the pop recording industry (’70–’90s). His albums Face to Face (WEA 1985) and Book of Dreams (Polygram 1987) marked Chan as a full-fledged singer-songwriter. Along with Dick Lee and Chris Ho, Chan blazed new territory with confidence and originality that was largely absent in Singapore’s entertainment scene.

In 1990 his breakthrough album China Blue burst on the scene. It unexpectedly combined Asian and Western instruments, pop and traditional motifs and styles, English, Mandarin, and Malay lyrics, alongside purely instrumental tracks. His success in fusing a seamless kaleidoscopic and hugely popular album led him to be picked up first by BMG and then by Hori Pro records (Japan). Chan’s own brand of pop music rooted in Singapore’s multiculturalism honed through six albums gave Singapore a unique pop sound and musical identity that remains unrivaled today.

Chan is also a pioneer in crossing over from being a recording artist to being a composer and music director for theatre works. His unique gift for words, understanding of dramatic pulse, and his undying search for meaning in his art resulted in stunning music, unforgettable songs and breathtakingly new landscapes of sound and music for seminal theatre works from the ’80s to the ’90s. This included Lao Jiu (Kuo Pao Kun & Ong Keng Sen), Lear (Ong Keng Sen & Japan Foundation), Private Parts (Michael Chiang & Theatreworks), The Day I Met the Prince (Kuo Pao Kun & Practise Performing Arts), Medea (William Teo), Ozone (Arifin Noer), Three Children. (Krishen Jit), M Butterfly (Ivan Heng, SRT) and many more. During this period, he was also Composer in Residence at Theatreworks for a decade.

From 2000, Chan took a new direction writing orchestral music Email & Eternity for the Singapore Chinese Orchestra, before embarking on a series festival commissions, in which he conceptualized, wrote, and performed, in some his most intense compositional works to date. These were full-scale productions that involved working with some of the top classical and traditional instrumentalists available in the region. These projects saw Chan at his most mature, composing for mixed ensembles of traditional/classical music for film and theatre projects.

Returning to Singapore in 2015 after 14 intermittent years away, Chan continues to engage, explore and extend his work. He recently released his 7th solo album Blue Guitar and is currently working on his novel to be published in 2018. Chan received the COMPASS Artistic Excellence Award in 2016 for his outstanding achievements in music. He was nominated for the Cultural Medallion award 2018 in the Music Category. He also scored the music for soon to be released Painting Life, by renowned Indian filmmaker, Bijukumar Damodaran.

Brian Gothong Tan (b.1980, Philippines) is best known for his cutting-edge and highly engaging works in theatre, film and installation art. He graduated from California Institute of the Arts in 2005 under the Shell-NAC Scholarship. He has conferred the Young Artist Award in 2012 and Singapore Youth Award in 2015, and has won the Life! Theatre Awards for Best Multimedia in 2005, 2008, 2012 and 2016. His recent works include Tropical Traumas (SIFA 2016), Into The Wild (ArtScience Museum, 2017), and Lost Cinema (2018), supported by the National Arts Council’s Creation Grant.