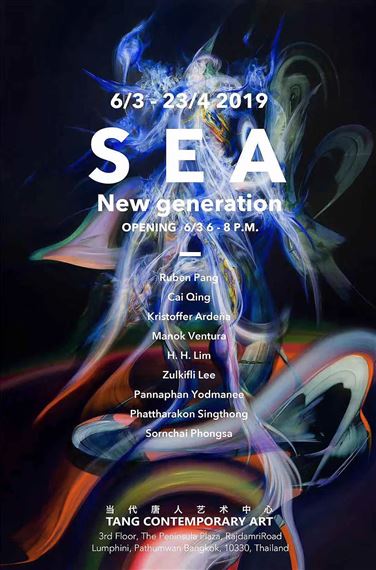 Tang Contemporary Art Bangkok presents a group show with works by artists coming from different countries of South East Asia (SEA). The exhibition offers a distinct look at works by nine artists, providing a glimpse at the transformation and recent developments of the new artistic generation originating from Southeast Asian countries.

Historical and cultural heterogeneity of the countries in Southeast Asia is a common phenomenon that has a major impact on most of the artists from the new artistic generation. What connects them is the fact that they all develop their own concepts, while exploring a highly individual artistic dimension. Even when the subject is related to society or politics, it remains on a very profound level, it lives in their artistic cosmos and never exits it, never makes the effort to get too close to the public, never has the intention to please public while being directly engaging.

On the contrary, it is art that stands for itself, self-sufficient, it is a kind of art that is context-independent and is not affected by the passage of time or trends. “Out of context” as one of the characteristics is also the key to understand not only this show but to decrypt the entire new generation of SEA art. The criteria used for selection of these artists are defined by the thoughtful and sensitive process of artistic transformation, rather than by age differentiation. When talking about the older generation of SEA artists, the main focus is on the majority of artists who worked and was popular during the ‘90s until approximately 2010, and among those artists, we recognize some unquestioned masters.

This particular artistic generation needed to be contextualized in order to find its universal interpretative keys. What makes it different and also represents the big shift led by the new generation, is that the new artists speak a universal language. They less depend on the social environment compared to the previous generation, and they feel free to express their views and develop their practice in unconventional ways. Social elements, living habits and art research among groups and schools are not as influential as before, and these artists are now free to explore and reflect on the psychological aspects of art, simultaneously manifesting their own vision. And when they express reflections about society, they do it through an unrestrained and personal lens. This show intends to push the boundaries of the regional context, giving the definition of “S.E.A. art” a different connotation.