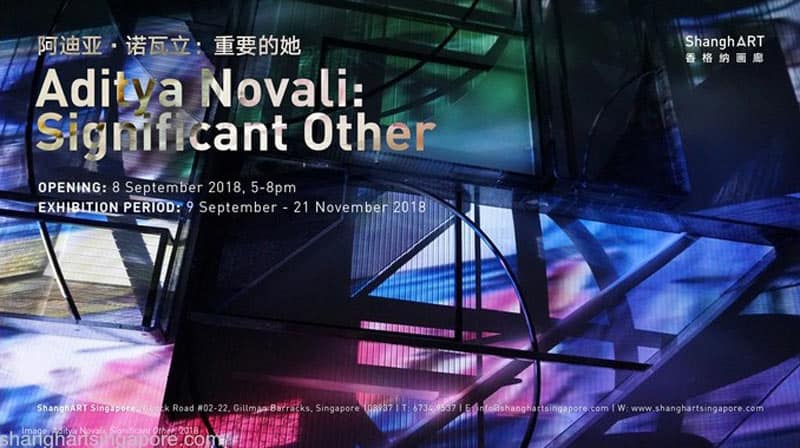 ShanghART Singapore is pleased to present Significant Other, a solo exhibition by Indonesian artist, Aditya Novali, featuring an entire series of new works. The exhibition opens on 8 September 2018 and will be on view from 9 September to 21 November 2018.

Aditya Novali’s new series of work seeks to explore the universal experience of coming to terms with the numerous uncontrollable facets of life. Novali’s inspiration came from his daily occurrences and observations of his sister whom is a person of special needs. The two individuals connected by blood are seemingly disconnected on the surface in their communication and interactions. Living their lives as what seems to be two parallel lines, this disconnection forces Novali to ponder about their co-existence, eventually realising the presence of a symbiotic relationship between them, where one’s emotions bounces off the other. He later understands this relationship as a hidden driving force behind some of his earlier works.

Novali’s sister derives peace from drawing daily, having produced hundreds of drawings. Recognising the uncanny resemblance between his sister’s drawings and his works, Novali was inspired to collaborate with his sister in order to discover a similar ground between the both of them, by adopting her drawings into his works.

Aditya Novali constantly investigates social issues such as urban living and identity throughout his art practice. Through this series, he challenges the notions of normality and identity in the everyday. Using his closest social entity, his sister and family, as a basis of his investigation, Novali draws on the issues they face as a family, such as discrimination, the pressure to conform, and being marginalised by society. The fluidity in Novali’s new works reflects how he deals with such societal constructs, where the public often attempt to reconstruct individuals who are different to fit into what we habitually perceive as the norm.

He frequently uses methodological techniques to create margins, develop rules and instructions, taking full control of the making process. Novali believes that abstract works are guided by certain perimeters and do not come freely from emotions – they follow a logical process which he systematically identifies and strictly adheres to. Despite his constant attempt to deviate from his typical orderly systems, he tends to veer back to a similar process. Significant Other will see the result of his endeavor in freeing himself from his rules.

The exhibition features two groups of works – the first being a series of sculptural forms fused with video projections of Novali’s sister’s drawings, where colours and shapes intersect and blend together with flashings of light. The other group utilises Augmented Reality technology to layer drawings by Novali’s sister over his own, crafting a sense of absence and presence, connection and disconnection. Both series challenge Novali’s former methods by limiting logic. Allowing his sentiments to lead him in the most organic way, this is the beginning of how Novali searches for an approach to reconcile the complex emotions towards his significant other.

Aditya Novali (b. 1978) is an artist based in Solo, Indonesia. He received his Bachelor of Engineering in Architecture from Universitas Katolik Parahyangan, Bandung, Indonesia (1997 – 2002) and IM Master of Conceptual Design from the Design Academy Eindhoven, The Netherlands (2006 – 2008).

Novali works with a variety of materials, often first conceiving an idea and then finding the right medium to transcribe his vision. His background in architecture plays an influential role in his work. His sensitivity to structure, space, and knowledge of construction shapes his approach and aesthetic. Addressing themes such as boundaries, identities, materialism, and urban life, Novali’s work interacts with the viewer and transforms with each viewing.

A finalist in the 2010 Sovereign Asian Art Prize, Novali was also awarded Best Artwork in the Bandung Contemporary Art Awards (BaCAA) in the same year. He was most recently awarded the Best Young Artist award in the inaugural Indonesian Art Award for Authenticity, Leadership, Excellence, Quality, Seriousness in Art organised by Art Stage Jakarta in 2017 and will be participating in Asia Pacific Triennale 9 in Brisbane, Australia in November 2018.

works and lives in Solo, Indonesia