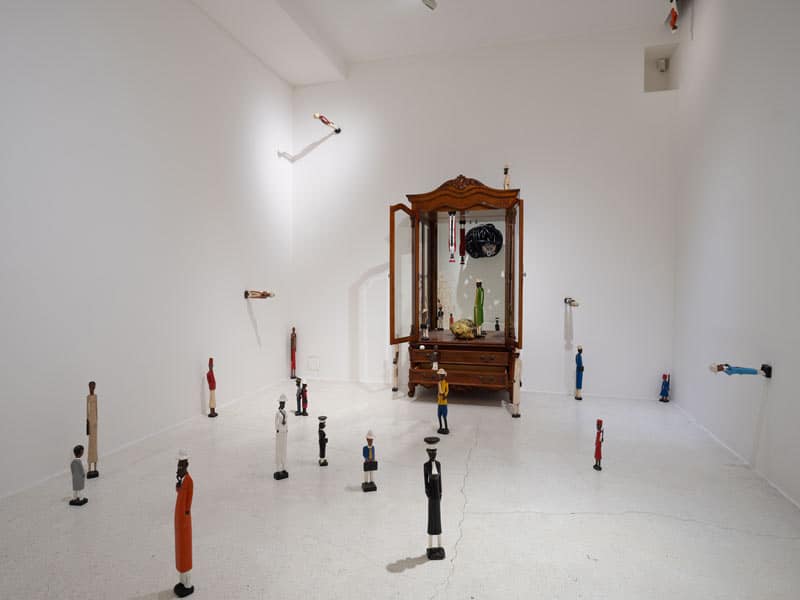 Hong Kong—Nylonkong Dreams is the first solo exhibition by Pascale Marthine Tayou in Hong Kong. Tayou, an installation artist of Cameroon descent, is currently based in Ghent, Belgium. He first came to prominence for his participation in Documenta 11 in 2002 and the Venice Biennale in 2009.

Nylonkong, shorthand for New York, London and Hong Kong, refers to the three leading financial centres of the world that all share similar economic and cultural traits.i For Tayou, these metropolises signify the crossroads for our civilization whereby many personal dreams can be realized. This boundless idealism in fact sets the pace for other cities to follow. If the growth of these global cities is dependent on their ability to exert greater economic control over a larger geographic spread, whose city is it becoming?ii Does the majority of the population situated outside of this economic equation have any real influence on the future of where they live?

To bring about a new awareness of this dilemma, Tayou contemplates the way in which we, as human beings, manage our desires at the most basic level. Are there any universal ideals we can still share as a community of people? Shy of labelling himself as an artist but instead, in his own words, as “a lost man in the universe of forms, a man shuttling in the space of multiple unknowns”, Tayou’s own travels have become a constant source of inspiration in his exploration of the ambivalence towards transnationalism, an issue that is close to Hong Kong. Furthermore, if the function of a gallery is to endow individual artworks with meaning, Tayou considers the exhibition as a germane platform to reflect on humanity in the broadest sense. Tayou states, “Nylonkong Dreams is intended to delve into the flesh of earth of men and to seek a common gene that binds all of us.” This exhibition takes on the form of “a garden of confrontation of the past and the future”. To provoke hallucinations, the artist simulates a hyperconscious state of mind that in turn questions the very essence of human fate. In doing so, this visual experiment blurs the distinction between past and present, real and virtual, ritual and the everyday, as well as material and immaterial, bringing us closer to experiencing the very contradiction of contemporary life. For this exhibition, Tayou incorporates a stable of art objects made from the past and juxtaposes them with locally sourced industrial materials to create a panoramic vision across the entire space.

Inspired by lianas [or rooted vines] commonly found in tropical forests, we are greeted with a large rectangular wall maze made with thin bamboo sticks to question our whereabouts. Intrigued by the richness of Chinese history but equally rebuffed by China’s economic dominance on a global scale, Bamboo Labyrinth expresses China’s insatiable desire for economic expansion at the expense of denying the cyclical nature of the country’s history. Tayou comments on the relationship between the past and the present: “I still believe that the past is closely linked to the future and that it is up to the present to define the basis of the future.” The labyrinth recalls the plot of the short story “The Garden of Forking Paths” by Jorge Luis Borges. The way in which we experience progress and its trauma is governed by a web of time. The main protagonist claims, “Time is forever dividing itself toward innumerable futures and in one of them I am your enemy.”iii Tayou assumes the role of an enemy.

Colourful Lines D appears like a fictional cloud suspended from the ceiling of the gallery, giving the immaterial Internet a tangible form. Let us ponder on the amount of labour and natural resources needed to sustain a virtual life.

Tissage, meaning to weave, uses air-conditioning conduits to form an intricate lattice structure that covers the entire gallery wall. To achieve a fuller meaning in life, we must liberate ourselves from the constraints of institutional and political structures. Tissage also comments on the use of physical borders to control the movement of refugees for the sake of protectionism.

Colourful Stones is an arrangement of quarried granite stones used for pavement. As a tongue-incheek commentary on the issues of race and colour, each stone is deliberately sprayed with a primary colour. Similar granite stones were also used to combat police during the student protests in Paris in 1968, splitting allegiances and creating divisions in a democratic society.

For his Masque Gri-gri series, an African head made with Tuscan glass is wrapped with black striated pipes to depict a demonic figure. Gri-gri is a good luck Voodoo talisman originating from Africa. Living in a social media savvy time, truth is often pushed very far away at the expense of instant gratification. We often value hypocrisy more than sincerity. While many adopt alternative online personas as a form of psychological escape, others refuse to speak or to confront reality altogether. For narcissism is the new evil in the brave new world.

CHINAFRIQUE A and CHINAFRIQUE B is a set of two large-scale photographs that express the ambivalent relationship between China and the African continent. Shot in a casual manner, the photographs depict teenagers from Tayou’s hometown who are wearing different masks to further disguise their true identities. Using slats of colourful tissue to create a web in front of the actual photographs, the intention is to further cloud our gaze of the anonymous others.

To instil a sense of lightness and joy to the whole exhibition, Happy Birthday Baby and Happy Frame are celebratory ornaments that function as interludes between separate artworks with more serious meanings.

Poupées Pascale Hong Kong is a series of figurative glass sculptures displayed throughout the gallery. For Tayou, the Pascale dolls embody an illusion that has become real over time and being practiced like a ritual that reflects on the artist’s own transience. Tayous states, “Objects are the denominator of my existential action. The material is anything that I find on my way and that I divert, instilling a soul into it. The crystal sculptures are of tribal inspiration, mainly African; the base is made of crystal but they are dressed with contemporary items taken from modern fetishism.” Each crystal body is dressed in materials sourced from where the exhibition is held. Shanghai Colonial represents a group of settlers. Initially made as a souvenir for the colonizers and subsequently for tourists, the artist literally curses these sculptures by inserting Mikado sticks into their bodies. Some of these objects are then displayed inside a cabinet of curiosities. Tayou pokes fun at an encyclopaedic vision of the world and critiques our preoccupation with indigenous objects.

Chalk Paintings are two-dimensional artworks filled with colourful pieces of chalk and small objects embedded on the surface. During Tayou’s childhood, colourful pieces of chalk were used for street games. The chalk brings to mind the process of colonization through the use of education and language. Like his Lampedusa, these artworks are diaries of the artist’s subconscious that is always in flux and recollect disparate memories of Tayou’s own biography.

Tayou Self-taught artist Pascale Marthine Tayou was born in 1967 in Cameroon. He was raised to become a lawyer; however, he believed law was too “perfect”. Thus, he began his artistic career in the early 1990s. He currently lives and works in Yaoundé, Cameroon and in Ghent, Belgium.