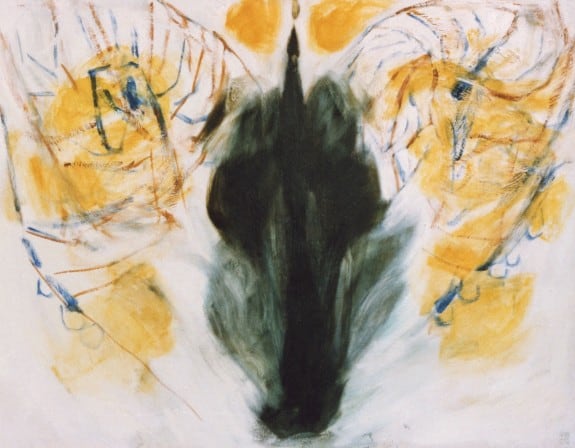 Shanghai—Pearl Lam Galleries is pleased to present A Material Lineage, a duo exhibition of works by mother and daughter Chinese artists Pang Tao (b. 1934) and Lin Yan (b. 1961). With works that span over half a century by two generations of artists from one family, dating back to as early as the 1960s and up to the present, the exhibition is built on spatial and temporal intersections that are not only anchored through specific time periods that indicate the artists’ shared life experiences, but also encapsulate points where their parallel practices in a variety of mediums contrast and resonate with each other. The show highlights a lasting artistic lineage that goes beyond blood ties and burgeons an open and experimental attitude towards art regardless of age and categories.

The art and life of Pang Tao had long been nourished by her parents who were both acclaimed for their devotion to modern art and design in China since the beginning of the 20th century. Her father, Pang Xunqin, and mother, Qiu Ti, were founding members of the Storm Society, an early avant-garde art group in China, and the former also facilitated the establishment of the Central Academy of Arts and Crafts. In her later formative years, Pang’s paths as an independent artist and an educator in an art academy crossed and collided with the dominating ideology at the time and teaching responsibilities she assumed from the 1950s until the end of the ’70s. She devoted her talents and personal interest in painting in a lyrical and politically insensitive approach while working on teaching assignments and state commissioned projects during the Cultural Revolution.

Incorporating a few historical works from this time period, the exhibition takes the end of the 1970s and the 1980s not only as a time of reset when Pang drifted away from realism and moved towards experimental abstraction—mostly notably in her Bronze series spanning from 1984 to the new millennium—but also as a coherent transitional space where her works were not simply categorized by style and read in line with historical restraints. Her works began to be fueled by a remarkable flow of innovative breakthroughs that have continued throughout her practice.

On show is a carefully selected group of works by Pang Tao that give insight into specific situations and transitions, organized non-chronologically in accordance with the sense of expansiveness revealed in her oeuvre. Highlights in this time period include Pang Tao’s works on paper that reveal the undogmatic socialist atmosphere in the 1970s, together with the refreshingly vibrant en plein air landscapes painted with stunning sensibility between 1978 and 1979. It was a time when her daughter, Lin Yan, would also frequently join her in this embracement of liberating openness that aided Lin’s own explorations later on.

Travels in Lijiang I (1981) is among the series of sand paintings that signify the beginning of Pang’s experimentations with mediums and composition, while the idea of adding pulverized marble onto the painting’s surface came from her father. In her groundbreaking Bronze series, Pang Tao further deals with the flattening of space in a meticulous way. Color patches imbued with an abundant variety of hues resonate with each other, while gently delineated lines are sometimes made visible to give the works an illusionary solidness.

As hinted in its title, Revelation of Bronze takes the motif of bronze ware from traditional Chinese culture and develops it through a formal exploration that goes well beyond decoration. The artist infused a dedication and seriousness that was veiled in the 1980s amidst the avant-garde movement and discourse into her work. Most of Pang Tao’s practices have been inspired by music, a life-long passion that dates back to her childhood, as seen in Change of Colour Gradation, a recent series that synchronizes the rhythm between colors, lines, and music notes.

Lin Yan’s work, on the other hand, takes a seemingly different approach with Xuan paper as her main medium. She has been developing an acute sensibility manifested in a variety of materialized forms as well as in the tackling of implicit contemporary issues. These concerns include the problematic progression of modernization as well as a loss of traditional values such as the balancing of extremes in yin-and-yang philosophy.

Furthermore, her work features a gentle but determined free spirit not unrelated to generations of family cultivation in a broader social context, which infuses her works with not only an aesthetic calmness in accordance with changing surroundings but also a heaviness that dissolves into an invisible magnetism in a recurring play of memories and perceptions mixed with delightful humour. Structural textures or textured structures is one of the unique features of her works. Similar to the way that the variation of colours in different formats has played a role in Pang Tao’s oeuvre, in Lin’s works, the juxtaposition of fragility and firmness is balanced through an indescribable treatment of layered nuances, most evidently expanded on in her discovery of the potential of the colour black from the mid-1990s to 2000s as well as later monumental and architectural Xuan paper installations.

In this exhibition, Lin Yan has created a set of two installations, Today No. 1–2, which consist of untreated industrial cement pipes and Xuan paper that either pour down from the mirrored ceiling with reflections, lights, and texture in play, or flow or crawl on the floor like a living organism from inside the concrete tube. The works portray the three-dimensional space as a contemporary artificial landscape.

The pairs of en plein air sketches at the end of the 1970s by Pang Tao and Lin Yan are also put in the same section, drawing forth a drastic contrast between different delineations of social landscape. “Empire”, “Pray”, and “Rose” are the brand names of three brick factories in New York that Lin occasionally came across. She weaved the implications of these words into her series of paintings of the same name that are also on show. Together with small-scale sculptural paintings and installations, what Lin Yan has created for the exhibition is a breathing spatial continuum that parallels a timeless lineage from which a distinctive exploration of her own time has emerged.

Founded by Pearl Lam, Pearl Lam Galleries is a driving force within Asia’s contemporary art scene. With over 20 years of experience exhibiting Asian and Western art and design, it is one of the leading and most established contemporary art galleries to be launched out of China.
Playing a vital role in stimulating international dialogue on Chinese and Asian contemporary art, the Galleries is dedicated to championing artists who re-evaluate and challenge perceptions of cultural practice from the region.

The Galleries in Hong Kong, Shanghai, and Singapore collaborate with renowned curators, each presenting distinct programming from major solo exhibitions, special projects, and installations to conceptually rigorous group shows. Based on the philosophy of Chinese literati where art forms have no hierarchy, Pearl Lam Galleries is dedicated to breaking down boundaries between different disciplines, with a unique gallery model committed to encouraging cross-cultural exchange.

Further building on the Galleries’ commitment in Asia, Pearl Lam Galleries is delighted to announce the opening of its new gallery space in Singapore at Dempsey Hill in March 2019. The four gallery spaces of Pearl Lam Galleries in Hong Kong, Shanghai, and Singapore represent an increasingly influential roster of contemporary artists. Chinese artists Su Xiaobai and Zhu Jinshi, who synthesize Chinese sensibilities with an international visual language, are presented internationally with work now included in major private and public collections worldwide. The Galleries has also introduced leading international artists, such as Leonardo Drew, Jenny Holzer, Carlos Rolón/Dzine, and Yinka Shonibare MBE, to markets in the region, providing opportunities for new audiences in Asia to encounter their work. Pearl Lam Galleries encourages international artists to create new work which engages specifically with the region, collaborating to produce thought-provoking, culturally relevant work.