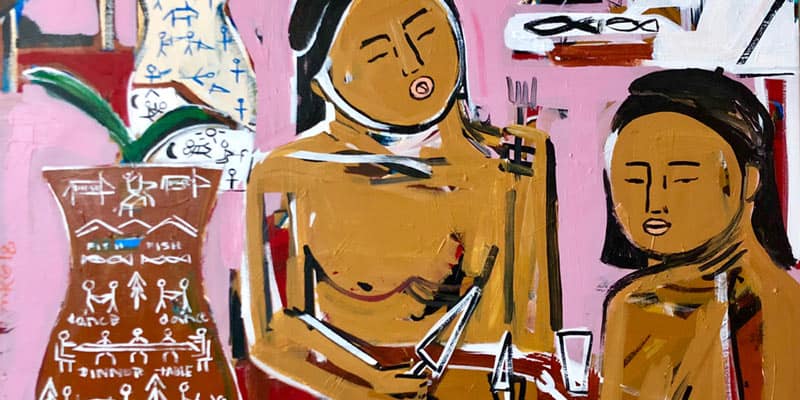 Over the Influence is proud to present Drawing Room, a group exhibition of paintings and sculptures by Katie Stout, Dabs Myla, Andy Dixon, and Monica Kim Garza, on view August 17 – September 15, 2018. There will be an opening reception on August 16, from 6-8 pm. Each artist has created works that reflect an individual idea of the “Drawing Room,” offering a unique vision of traditional private spaces within a residence. Whether to write, read, or entertain visitors, drawing rooms bridged the personal and communal parts of a house.

Representations of domestic spaces became sought after with the rise of middle class patrons and a burgeoning art market early in the 19th century, with photography superseding paintings in the modern era. Markers of wealth, these interior depictions reflected the lifestyles, habits, and values of their residents. The intricate images were snapshots of life stories told through commodities.

The majority of the works in Drawing Room have been commissioned especially for this exhibition and will be the first time the artist has presented in Hong Kong. In a sculptural installation, designer Katie Stout transports an archetypal living room to the gallery in her subversive singular style. Monica Kim Garza builds upon her oeuvre of highly contemporary, post-Impressionist female portraiture, along with Andy Dixon’s paintings–realized in vivid color–of the auction rooms of Sotheby’s and Christie’s as posted on their Instagram profiles, and duo Dabs Myla renders a midcentury modern utopian vision in bright, graphic imagery.

About Katie Stout
Katie Stout (b. 1989) is a designer based in Brooklyn, NY. She describes her work as “naïve pop,” riffing on traditional attitudes towards furnishings and “suburban domestic life.” Through a body of work encompassing furniture, lighting, textiles, and objects, Stout continually seeks to subvert the utility of her designs, imbuing them with a strong sense of irony or sardonicism while bestowing an air of innocence. She received her BFA from the Rhode Island School of Design and won the first season of HGTV’s series “Ellen’s Design Challenge” in 2015. Numerous collaborations include: her fantastical “Bedroom Curio” exhibition at Design Miami
2015, which was photographed by Juergen Teller for a Barney’s Rick Owens campaign, a furniture partnership with Bjarne Melgaard for his installation at the 2014 Whitney Biennial, and working with Jeremy Scott on his F/W 2018 collection. Her work has been displayed in the Museum of Contemporary Art Santa Barbara and is in the permanent collection of the Los Angeles County Museum of Art.

About Andy Dixon
Andy Dixon (b. 1979) is a Canadian artist who lives and works in Los Angeles, CA. His large scale acrylic paintings are filled with motifs that signify wealth and communicate the intimate relationship that exists between art and money. Reminiscent of Renaissance still lifes with a wholly contemporary palette and personality, Dixon’s pieces wrestle with valuation–their own and what they represent–or “what is the value of a painting of a valuable object?” His solo
exhibitions include: ‘Expensive Things II’, Winsor Gallery, Art Toronto (2016); ‘Expensive Things I’, Winsor Gallery, Art Toronto (2016); and ‘Leisure Studies’, RHG, New York (2015). Group exhibitions include: ’10 Year Anniversary’, Joshua Liner Gallery, New York (2018); ‘Art Seattle’, Windsor Gallery, Seattle (2017); and ‘Art Toronto’, Windsor gallery, Toronto (2016),
and ‘O Canada!’ (2017), BEERS London.

About Monica Kim Garza
Monica Kim Garza (b. 1988) is an American artist based in Atlanta, GA. Working from her multicultural background (Kim Garza is of Mexican and Korean descent) and self-portraits, she creates images of women with broad strokes in quotidian situations, drawing from dreams, memories, and projections that recall early modern masters in their style. Often nude, Kim Garza’s women depict a singular woman’s point of view that transcends into the realm of the universal. She has had solo exhibition at Groupe/ANON (New York, NY), Lily Roberts (Paris, France) and New Image Art (Los Angeles).