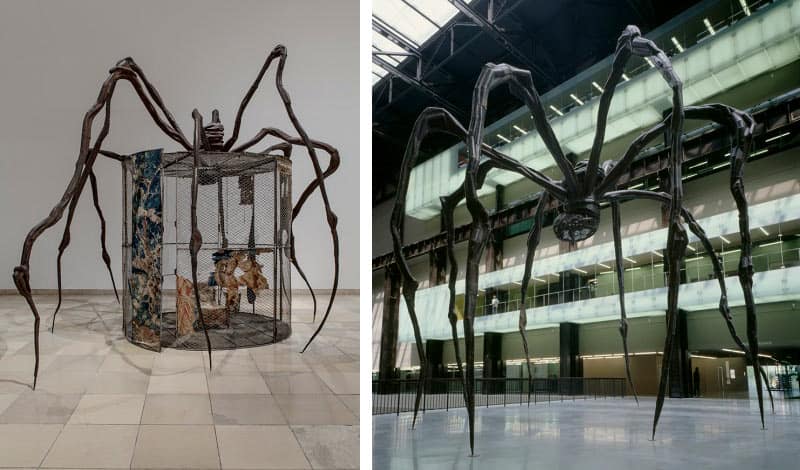 Rocking to infinity
the red skein
It will never be
interrupted, abandoned
or cut.
There is one eternal
thread and it
is you– Louise Bourgeois

Louise Bourgeois: The Eternal Thread is the first large-scale museum exhibition in China of work by French-American artist Louise Bourgeois. Widely regarded as one of the most important artists of the 20th and 21st centuries, Bourgeois is renowned for creating a body of work that fuses psychological depth with the high formal invention. The show offers a focussed survey of major works from the artist’s entire career, including Personage sculptures from the late 1940s, Cell installations from the 1990s, the fabric works of her final decade, and the monumental spider sculpture Maman.

The Eternal Thread allows for multiple readings of Bourgeois’s work, which are symbolically linked by the unifying motif of the uncut thread that runs throughout her oeuvre. In her early drawings, the thread often symbolizes hair and the skein of time. Her hanging sculptures exist in a permanent state of ambivalence and doubt: secure yet vulnerable, fixed yet susceptible to turn and change, they are suspended from a single point and literally hang by a thread.

The motif of the uncut thread also references the prominence of fabric and sewing in the last fifteen years of Bourgeois’s life. Her fabric sculptures and drawings were made from the clothes, bed linen, towels, and other textiles saved over the course of her long life, a fact that invests these works with a strong biographical and emotionally resonant note. Bourgeois was born into a family of tapestry restorers and worked closely with tapestries as a youth.

Her iconic spider sculptures are representations of her mother, who was in charge of weaving and restoration at the workshop in France. Thus the eternal thread also stands for the umbilical cord that binds mother and child together. The spider creates its web, which is a living architecture, out of its own body, just as Bourgeois made her sculptural forms out of her own body.

For Bourgeois, sewing, stitching, and joining are symbolic actions that enact her wish for reconciliation and reparation, even as they ward off her lifelong fear of separation and abandonment. Engraver, painter, sculptor, and installation artist, Bourgeois worked across different media throughout her life, and yet her output is rooted in a consistent set of emotional themes. Indeed, the eternal thread may be read as the realm of the unconscious, timeless and eternal, from which the multifarious and at times contradictory forms of her art emerge.

An in-depth publication—featuring the curator’s title essay, a preface by Ms. Wang Wei, founder of the Long Museum, a commissioned text from a leading Chinese critic or art historian, a selection of the artist’s writings, and a full-colour plate section—will accompany the exhibition published by Shanghai Fine Arts Publisher.

About the Artist
Internationally renowned artist Louise Bourgeois was born in Paris in 1911. Although she lived in New York from 1938 and until her death in 2010, much of her inspiration was derived from her early childhood in France. Using the body as a primary form, Bourgeois explored the full range of the human condition. From poetic drawings to room size installations, she was able to give her fears physical form in order to exorcise them. Memories, sexuality, love and abandonment are the core of her complex body of work. Bourgeois’s work appears in collections worldwide, and in 2007-2008 she was the subject of a major traveling retrospective organized by the Tate Modern in London and the Centre Georges Pompidou in Paris. Recent solo exhibitions of her work have been on view at the Museum of Modern Art in New York and the Tel Aviv Museum of Art in Israel; current shows include an installation of Bourgeois’s Spider works at the San Francisco Museum of Modern Art in California. Exhibitions at the Schinkel Pavillon in Berlin, Germany, and at Glenstone in Potomac, Maryland, are opened recently.