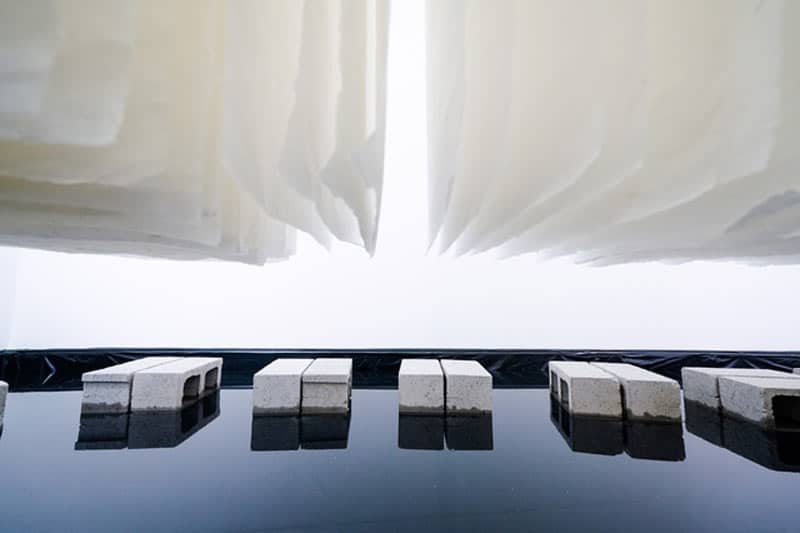 Leo Gallery is pleased to present “Soft Power 2018, A Female Artists’ Exhibition”, as part of the Gallery’s ten-year anniversary exhibition series in Shanghai. As the sixth exhibition of the series “Soft Power”, that Leo Gallery has held since 2011, the works and thoughts of essentially two female artists, namely: Ingrid Ledent and Lin Yan will be presented. Ingrid Ledent, a renowned contemporary printmaking artist, and Chairman of the International Adviser Board at International Printmaking Organization Alliance continues to expand the boundaries of traditional printmaking. She combines the latter with computer prints, video and sound pieces, where a new horizon for printmaking creations rises. Ledent has used reproducibility, as a characteristic of printing techniques, not to make editions in a simple way, but to generate unique artistic elements. Along with her printing process, with aqueous layers, where repetition dissolves into the windows of spatial tension and creates organic silhouettes, time becomes one of the main themes in Ledent’s work. Influenced by Henri Bergson’s concept of time, she has been trying to seize Durée, as the perception brought by reproducibility and time has been implicated in the word mindscapes, which the artist created specifically for the theme of the exhibition. Mindscapes, per say, do not exist but can be considered as the artist’s visitation to some sort of word game, as it refers to specific mental and emotional landscapes of the artist’s thought process and headspace.

Since the 1990s, Lin Yan has been working and living in New York City. Oscillating between Chinese and Western culture, she revisits her memories and emotions rooted in both East and West. Yan was strongly shaped by Chinese Taoist thought, leaving her work toothed in the spirit and image expression of Oriental philosophy. She uses “Xuan Paper”, also known as rice paper, an indispensable material in traditional Chinese painting and calligraphy, as the main material in her work. Lin Yan’s work is a journey through traditional painting, sculpture, and deconstructs of Xuan paper, along three dimensions of line, surface, and body.

Compositional elements, such as the multiple layers of Xuan paper, let the spectator indicate a sense of freeing deliberation. In its simplest black-and-white color, the installation exposes dynamic posture in the setting of space and light. Respective fluctuations in her work evoke an explicit recollection of the changes of nature, culture, and society.

A lot of Lin Yan’s works have been inspired by her steady visits to China. As indicated by the exhibition theme “Inverted Shadow”, if she was to be closer to heaven and earth in Northern China, then in Southern China – or Jiangnan, as the thick air has given her the chance to revisit water, as a fundamental element in her work.

The recurring theme takes place in the exploration of the relationship between space and architecture, man and nature, but with no historical or geographical traces. In her view, the most valuable part of her work is the line between sensibility and spirituality. Nicely summarized in the question she once raised: “how to grasp the untouchable?”. This gives the artist the freedom to gradually transit from the obvious to the untouchable.

The aesthetic experience and perspective, as well as the taste of the life of females, have constituted special symbols which female artists convey in their creations. Both the female artists try to proceed from their individual experience to move their concerns inwards and display their personal and mental aspects through self-discoveries. This kind of pursuit of unique artistic languages by female artists is what Leo Gallery wishes to present and explore in the “Soft Power” exhibition series.

Time, as it is also in a process, is the basic theme in my work. I am strongly influenced by Henri Bergson’s idea of time, especially his philosophical thinking about “durée,” the continuous living of a memory which proceeds the past into the present. Emerging out of the manner in which I experience time, I highlight what cannot be interpreted as concrete, within the measurable time, for the soul is not able to comprehend the experience as a phenomenon within the limits of time. This is a foundation for my images, a non – transparent, archaic tissue of frequently recurring forms. Also important in the content are processes of manipulation, the phenomena of the matrix and the controlled coincidence or serendipity. Time is also involved in the human body as well as in the actions it undertakes. Therefore, I often use my own skin and body parts to reference and translate the time into more visual aspects.

If I were to be closer to heaven and earth in the north, then after coming to the south – Jiangnan, or the south of the Yangtze River in China, the moist air has given me a glimpse of water, another indispensable natural resource in life. The exhibition of “Lin Yan: Inverted Shadow” in the noble south is a reflection of the installation done in the north -“Phekda” that is the third star of the Big Dipper, also my reaction to ink as well as the attitude of modern humans towards nature.

1961 Born in Beijing, China
1984 Graduated from Department of Oil Painting, Central Academy of Art, Beijing, China (B.F.A)
1986 Graduated from Atelier of Technique of Painting, L’École Nationale supérieur des Beaux-Arts, Paris, France
1989 Graduated from Department of Studio Art, Bloomsburg University of Pennsylvania, Bloomsburg, United States (M.A)
Currently lives and works in New York, United States
Lin Yan, lives and works in Brooklyn, New York, grew up in Beijing. She followed her grandfather and mother’s footsteps to Paris continuing her studies in art in 1985. A year later, she came to the US. Her first solo show “Tai Chi in Painting” at graduate school infused Chinese philosophy into her own “constructing paintings.”

In 1993, she moved to New York with her painter husband Wei Jia and their young son. Taoist thought remains in her life and art. She seeks the simplest possible use of elements in her work. Though her forms are quite minimal and mostly quiet, they are filled with complex impulses and nuances. The foundation of LinYan’s large sculptural paper collage is a variety of hand-made paper which has been used for Chinese traditional painting and calligraphy. The crumbled layers of soft handmade papers with ink create a paradoxical effect of strong, post-industrial feeling. Inspired by old Beijing architecture in her memory and industrial elements in her Brooklyn home, LinYan blur boundaries, embrace conflict, bring histories, past and present together. Aware of the struggle and resistance in the world, she balances this restlessness with the tranquility of her materials. Her images investigate the interrelation of Chinese traditional painting and modernist abstraction, and postmodern appropriation and ancient technical rigor.

Lin Yan’s works have been widely shown in the galleries and museums, reviewed and featured in New York Times, Art News, Art in America, Art Asia Pacific, Architecture and Art, Elle China, Women of China, World Journal and CCTV, among others. Her works are in public collection of the National Art Museum of China, the Pang Xunqin Museum, the Chengdu Contemporary Art Museum, the Museum of the Central Academy of Fine Art in China and Deutsche Bank Art.