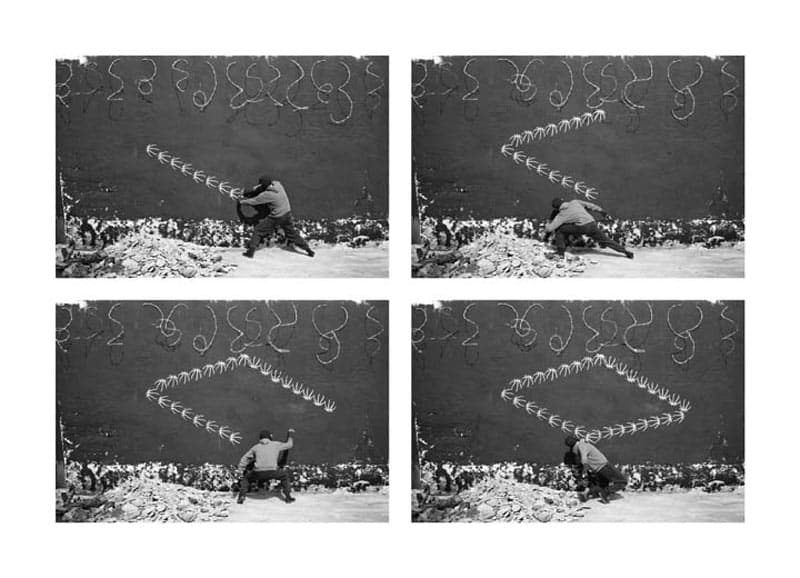 Lehmann Maupin is pleased to announce Gridology, a group exhibition featuring Gilbert & George, Liu Wei, Angel Otero, and Robin Rhode. Together, these artists whose work spans 2009-2015 and includes painting, photography, and mixed media sculpture, offer contemporary contextualization on the minimalist grid. As a formal device, the origins of the grid can be traced back to earliest art history, when the rectangle was established as the standard pictorial plane, likened to looking through a window. Most recently, the grid has endured through postwar to postmodern art, and has been transformed after decades, with these four artists offering unique, socially engaged, and personally reflective interpretations on the theme. The gallery will host an opening reception on Thursday, July 12, from 6 to 8 PM.

Gilbert & George (b. 1943 and 1942; live and work in London) have worked jointly since meeting in art school at Central Saint Martins, where they developed their signature form of “living sculpture” in 1967. Their works in Gridology are curated from their URETHRA POSTCARD PICTURES (2009). The series replicates “an angulated version of the sign of urethra,” arranged from postcards sold to tourists in the U.K. This shape—a continuous rectangle of cards, with a single card in its central space—mimics the sexual symbol used by the onetime theosophist C. W. Leadbeater to accompany his signature. In reducing this potent sexual symbol to an overly simple and grid-like format, Gilbert & George engage subject matter often left unregarded for its lowly or undesirable associations.

Liu Wei (b. 1972, lives and works in Beijing, China) explores 21st century sociopolitical concepts such as the contradictions of contemporary society and the transformation of developing cities and the urban landscape. In many of his sculptural and installation works, he uses found materials that are recontextualized to draw new meanings out of the materials from which they are made. He frequently uses geometric and architectural forms in his work as a reference to his urban surroundings. Gridology focuses on the artist’s Exotic Lands series from 2013, part of his wall-hanging sculptures that engage in repetition, symmetry, and geometry—all primary formal qualities of many of Liu Wei’s works.

Angel Otero (b. 1981, Santurce, Puerto Rico; lives and works in Brooklyn, New York) is a visual artist best known for his process-based paintings. Otero remains an innovator in the genre of painting, as he is constantly experimenting with new techniques. Rather than creating purely abstract and formal work, Otero keeps his process-based concept at the forefront of his practice, allowing for conversation about content in addition to formal qualities. All of the works in Gridology come from the artist’s Landscape Transfer series, spanning 2014-2015, in which Otero digitally distills a photographic image down to a line pattern traditional to woodcut techniques. He then traces the outline onto linen using silicone, and covers it with powdered pigment that sticks to the adhesive surfaces. This act and physical process of reproducing and obscuring are crucial components to Otero’s practice, in this case through the paring down of an image to a selective set of line work.

Robin Rhode (b. 1976, Cape Town, South Africa; lives and works in Berlin) has established his unique practice with a multifold approach, working across media, including drawing, performance, photography, video, and music. As a young artist inspired by the rebellion and possibility of graffiti, he was first drawn to working in public, unsanctioned spaces. Since then, his practice has evolved to become more closely aligned with and influenced by the minimal wall drawings of Sol Lewitt, and the 1970s performance work of artists such as Vito Acconci and Bruce Nauman, as well as earlier art historical references like Eadweard Muybridge’s stop-motion photography. The succession of images in works like Four Plays (2012-2013) and Dragon (2015) alter the two-dimensional photographs depicting the movements of the character featured, thus the gridded formation allows the artist to articulate the narratives central to his socially engaged works. Rhode has often emphasized the reciprocal and collaborative nature of his work, saying, “The reactions and responses of the people on the street, the conditions pervading that particular process—that’s part of the narrative.”

Rachel Lehmann and David Maupin founded Lehmann Maupin in 1996. In addition to its diverse American artists, Lehmann Maupin represents artists and estates from across Europe, Asia, Africa, and the Middle East, and has been instrumental in introducing numerous artists from around the world in their first New York exhibitions. Known for championing artists who create groundbreaking and challenging forms of visual expression, the gallery prioritizes personal investigations and individual narratives. Lehmann Maupin prizes the distinct conceptual approaches that its artists offer on the essential matters that shape international culture today, including gender, class, religion, history, politics, and globalism. In 2013, with two locations in New York, significant interest in its artists abroad, and with the dynamic opportunities of new markets evident, Lehmann Maupin opened its doors in Hong Kong, followed by Seoul in 2017. For more information on the gallery and its artists, visit www.lehmannmaupin.com