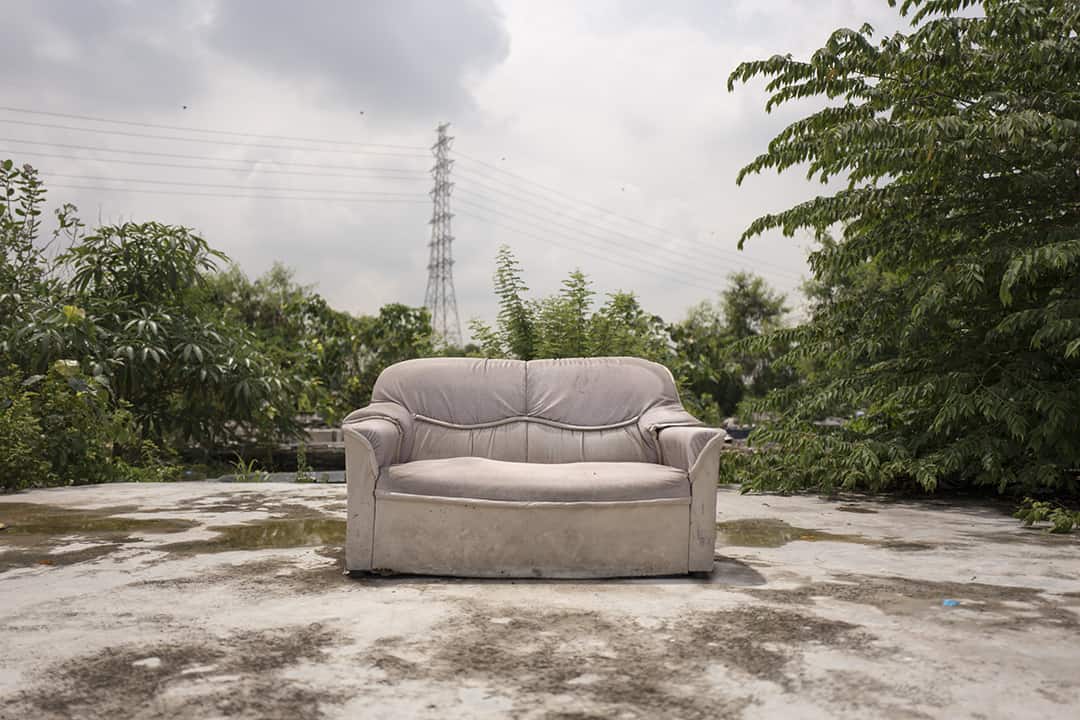 Kathmandu Photo Gallery proudly presents L I M B O Photographic Exhibition by Rafael Martinez on the 11th of May until the 24th of June 2019.

Strange horizons beckon to Rafael Martinez, and therefore to us, his viewers: ominous towers loom over eerie clumps of vegetation; an empty playground call to us from behind an archway jungle-Jim, seemingly the gateway to another world; a goalpost across a football field marking the border between man-tamed grass and the unruly coconut grove beyond. If the photographer is in limbo, it is because he can’t make up his mind whether to stay safe or surrender to his lost horizon’s siren song.

The daydreaming women section of ‘Limbo’ invites a more complex response, but perhaps only because the world has so objectified women as sex and status symbols that it’s almost impossible to see women simply as human beings who have become the preferred photographic subjects for both men and women, young and old. Their clothes, their hair, their handbags, their shoes, etc. are all socially permitted and even expected to be more expressive and colorful than the male. Their pronounced individuality enhances the universality of their mood. They are walking on crowded streets, but they are clearly elsewhere, absent, voided—in limbo. This has no agonizing connotation as in the sense of impatiently waiting. It’s waiting for nothing. It merely is.

Rafael Martinez: “I am searching and photographing margins and interstices. They are places where time passes less quickly, where streets are empty and calm with neither agitation nor tumult. Ancient times are present and hypermodern City seems far away, while It is very close, just around the corner, conqueror and self-confident. It can be seen in the distance, high buildings pointing to the sky, but surrounded by jungle, like ruins and remains of an ancient, forgotten civilization. These interstitial and ventral margins, probably destined to disappear, are strange, fantastic and necessary places, sweet but little disturbing, suitable sites for daydreams and fantasies.

On my way in search of such places, I also photographed people, mostly woman, absorbed in their inner worlds. Physically present, their bodies on autopilot and their spirits taking refuge in their inner margins. They are dreaming awake, thinking about their worries and building other worlds. Thus, these women, in this huge megalopolis, are no longer anonymous. The mask of neutrality that covered them, a few moments before, fell. We feel close to these reveries, that we all visit, without our knowledge and that snatch us, in a gap, out of time, out of space. We know how to recognize the face of the other, absent from the world, the face of one who wanders in his inner limbo, here partially and suddenly uncovered.”

Kathmandu Curator Manit Sriwanichpoom: “Rafael Martinez’s work achieves both technical and artistic quality. He is able to communicate his emotions so the world experiences what he feels. His photographs of Bangkok reflect his nomadic existence as a diplomatic spouse, following his wife’s job into unfamiliar cultures. However, his sense of alienation is shared by Bangkok’s natives amidst their city’s breakneck pace of change.”

Rafael Martinez (b. 1973 in Nice, France) has a master degree in macroeconomics. He took up photography in Bangkok where he has lived since September 2016. ‘Limbo’ is his first solo exhibition.

The magic-drenched name of ‘Kathmandu’, invokes the idea of adventure, above all; physical, spiritual and psychedelic adventures that serve to open one’s third eye and one’s life.

Since September 2006, Kathmandu Photo Gallery has endeavored to inspire such eye-opening and mind-blowing.

Aptly located in the heart of Pan Road’s ‘mini-India’ around the Sri Mariamman Temple in Silom, Bangkok’s financial and gem district, in a lovingly-restored pre-war shophouse, Kathmandu Photo Gallery was modeled on photographers’ shops of old, where one could walk in and sift through folders of signed prints for sale.

This is no idle pose, since its owner, Manit Sriwanichpoom, is Thailand’s best-known photo-artist in the international art world. Downstairs, the antique green walls display framed prints of Manit’s own work, while the airy upstairs gallery plays host to the current exhibition by established and emerging photo-artists, as well as our ongoing ‘Seeking Forgotten Masters of Photography’ project. A book corner offers art and photography books and spiritually adventurous titles on Hinduism and Buddhism, Tantra, Shamanism and mountain literature.