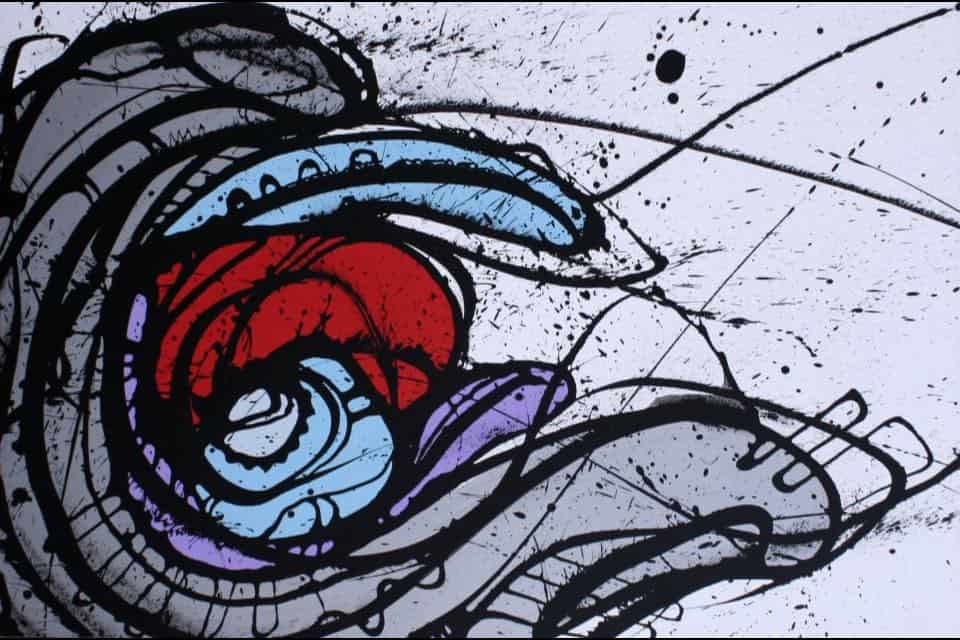 “We live in a world where there is more and more information, and less and less meaning.”
―Jean Baudrillard

►Toska Vosd
Belgian artist from Liege. Works in various mediums: tattoos, sculpture, furniture, paintings, walls, shops. Oscillating between various art styles the particular image of Toska is easily identifiable; his influences are as well shapes of stylisation out of the Maya art and Street Art where he cannot deny his roots. To enter his work is to forget space, time – in any case this is conceived – and get lost in a maze of colours and forms of a whole so complex. Because, do not be tricked, the simplicity in Toska’s art is only a facade. Before even creating, the preparation is of huge importance.

His works are created before all in his head, it comes in ideas that are focused, haunting and overflowing. “I start from the composition and features of the whole from: an object, a human or animal body and, as the process goes on, I break them down, simplify them to the maximum to go more in depth into the material, to even penetrate into the object, to identify: cells, energy, fluids and finally detach components, movements, and force them into a more universal and overall structure.” As in a puzzle, each element has been placed with attention to detail and finds its own part in a harmonious whole.

Toska loves to experiment and is currently working on new techniques, such as tests with phosphorescent colors and laser cutting sculptures. He also enjoys breaking codes and to explore where you wouldn’t expect it. On the long haul, the artist intends to give his art a different dimension. To know, you need to feel, see and breath.

►Jeff Ross
“I am a creator more than an artist. Everything around me is my inspiration. Bits, pieces, snippets, sounds, and feel all contribute as triggers, reactions, ideas, and results. My work comes as a product of where I am and what is at hand at the moment. Changing gears is a constant. I continually work on different types, formats and styles at the same time. Traveling around the world, taking the small roads, and seeking something new is the best source for my mind. Standing still or only making one kind of art is not an option.”

Born Wurtzburg, Germany 1961. Resided in Germany, Ohio, Texas, Colorado, California, Washington, and Bangkok. Self taught, what you see in his work is filtered through his travels, museum visits, art books, experimentation, trial, error and reckless abandon.

Since 1990, Jeff has been showing his work all over the world, including extensively in The US and Europe including Los Angeles, Seattle, NYC, Atlanta, New Orleans, and Bordeaux, Bern, Zurich, Amsterdam and Berlin.

►DRUIDE
“No graffiti without writing”

Straight, old school graffiti writer since 1987 from Paris, now living and writing in Bangkok. From 1987 when he started writing his name on walls to 1994, DRUIDE practiced all disciplines of graffiti, throw-ups, silver block letters, freestyles and ink handstyles from streets or trains to legal artworks. His favorite playground quickly became the streets of Paris city and it’s subway Metro, where he quickly emerged as one of the most active writers. His work turned into strictly illegal in the mid 90’s and he became a core member of the notorious Grim Team (GT). DRUIDE is known to paint highly visible places such as trucks, roof tops and shop doors of the french capital with his stylized signature as a logotype. Since late 2000’s he moved to Asia where his name is visible around different cities such as Hong Kong, Shanghai, Kuala Lumpur and Bangkok. In 2013, while he was in Hong Kong, he founded BSD (Back Street Dogs) an Asian writers crew with members from France, UK, Netherland, USA, Thailand and Hong Kong (biography by: Wasted Talent – Paris).

►RG.86
RG.86 his a french photographer/graffiti writer, who grew up in Paris. Practicing graffiti since he was 14, where his passion grew for painting trains and subways. After art school he decided to travel around the world to explore, discover, meet new cultures, learn the social codes and traditions. A traveller, who uses the photography to fix the instant. Influenced by French photographer Robert Doisneau, RG.86 likes to play with portrait and architecture and perspectives, trying to be as real as possible, the honesty of his pictures will make you dream, ask questions or just give another point of view to the life we live.