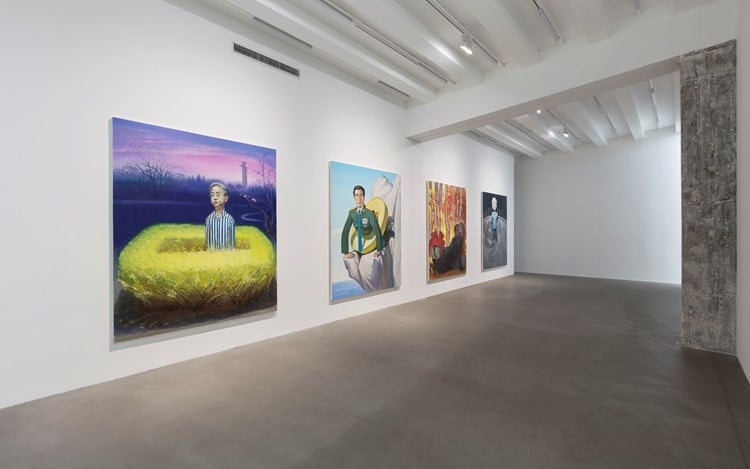 Galerie Urs Meile is honored to announce the opening of Shenyang Night, a solo exhibition by Wang Xingwei (*1969, Shenyang, China) in our former gallery space in Caochangdi, which accommodates the artist-in-residence program at the moment. The exhibition will take place concurrently with the Gallery Weekend Beijing 2019 (21 March–31 Match).

The eponymous work, Shenyang Night (2018, oil on canvas, 300 cm x 500 cm), forms the centerpiece of the show. A monumental piece depicting a historically tinted cityscape of Shenyang, including the TV tower, the cross bridge (one of the earliest cross bridges in Shenyang) and the Exhibition Center, all landmarks of the city. Set in the twilight, a gloomy scene unfolds and takes us back into the boisterous China of the 1980s. At first sight, one might presume a group of youths expressing their disappointment about a loss by their favorite football team. Upon closer inspection, symbolic objects of protest reveal themselves—a red flag seemingly set on fire, the awkwardly placed roadblock, the resigning fire hydrant, a No U-Turn sign (which was the key visual of the momentous China / Avant-Garde art exhibition held at the National Art Museum of China in 1989). The figure of ‘Wang Xingwei’ refers to a photo of the artist himself in 1990, with a facial expression that only people in that period of time have often characterized by a strong sentimental feeling, an awakened self-awareness, and a tendency towards hypocrisy.

The young artist’s bold yet fragile naked torso appears even more vulnerable in the light of the brutal high-voltage system about to crush the young man’s body. The figure in front wearily leaning against the roadblock is, in fact, a realistic portrait of a friend of the artist from that time—an idealistic, poetic but also athletic person with a perfect body and sculpted muscles. Together with the two withdrawing figures on one edge of the painting and the fire hydrant on the other, a stable yet dynamic relationship is composed with the heroically enlightened figure of ‘Wang Xingwei’ as the leading stage actor of a histrionic scene.

Wang Xingwei’s irreverent appropriation of visual references from both Chinese and Western art history has been a topic in his work since the beginning of his career. Years of exploring and experimenting with these references allowed him to build up his very own visual vocabulary. In Shenyang Night, he deliberately borrowed from German Romanticist Casper David Friedrich’s style of delicately illustrated and painterly descriptions, while having symbolic meanings at the same time. The rather ‘flat’ composition with a dark and reduced background drawing attention to the scene at front stage may allude to influence of French Neoclassical painter Jacques-Louis David.

The far-reaching incidents in 1989 were the only social event that the artist experienced himself. He has long harbored the desire to translate these sentiments he and his friends held. Looking at the symbolic complexity, the ambitious composition or the imposing dimensions of the painting, the viewer can gain a sense of the complexity of this period of time, especially for a group of young artists. In fact, the common theme of all the other works in the exhibition is the commemoration of the artist’s youth and the works completed between 1990 and 1993 in Shenyang.

The bittersweetness of youthful years, the reminiscence of a glorious past, the incurable romanticism and idealism are embodied in the artist’s self-portrait from his twenties (Self-portrait, 1990, oil on canvas, 47 cm x 37 cm) and the withering flowers (The Withering Flower, 1991, oil on canvas, 77.5 cm x 58.5 cm). Two reproductions of lost sketches from that period may indicate the irreversibility of these dramatic experiences. Wang Xingwei developed one of these sketches into My Beautiful Life (1993–1995, oil on canvas, 180 cm x 240 cm), while the other one was developed almost three decades later to Shenyang Night.

A catalog published by the gallery will accompany the exhibition. Parallel to Shenyang Night, The Code of Physiognomy, another solo exhibition by Wang Xingwei, will open on the same day at our gallery space in 798.