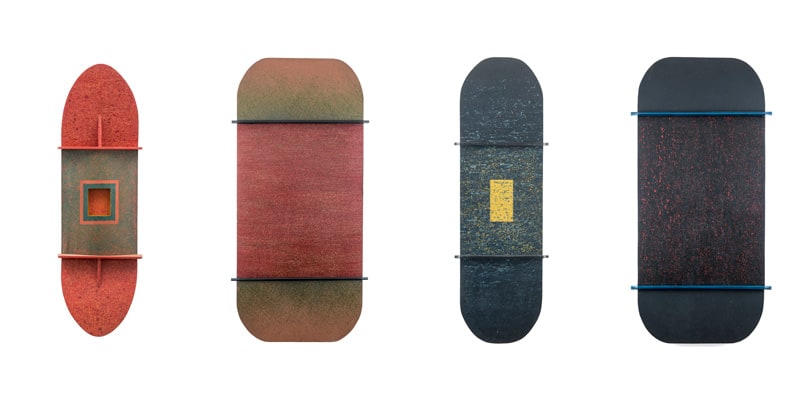 After delivering the groundbreaking Pago-Pago (1964 – 1969) and Mindscape (1973 – 1974) series that exhilarated the Malaysian art scene, Latiff Mohidin re-emerged a couple of years later with Langkawi. Inspired by his time in meditation at the seaside, these ‘sculptural paintings’ are named after the western Malaysian archipelago comprising 99 islands on the Straits of Malacca that is well-known for its mythical tales and landscapes.

Unlike the commanding brush strokes and fluidity of Pago-Pago and Mindscape, Langkawi is reserved, calculated and meticulously composed. Each is graphic in design and evokes symbolic implications suggestive of Islamic domes, rafts, battle shields, wall plaques, windows and portals to sacred places. Langkawi, of course, did not emerge without genealogy. In a process that spanned more than a decade, evident motifs – particularly the roofed triangulation, capsule, domes and stupa-like shapes – could be traced to both Pago-Pago and Mindscape. Its palette and character has been described relative to folk cultures and architecture from the Malay Archipelago. Through mastery in painting and carpentry, the sculptural forms of Langkawi engage viewers to step around and explore their protruding surfaces and distinctive outlines. And, amidst their quietness and mindfulness, Langkawi affords viewers pockets for respite and meditation.

Latiff Mohidin Biography
Latiff Mohidin was born in Seremban, Malaysia in 1941. He currently resides in Penang, where his home and studio are located. Wellestablished in the canons of Southeast Asian modern painting and Malay literature, the artist was dubbed ‘boy-wonder’ after his first solo exhibition at the age of ten. He responds to and finds the primary inspiration for his works through nature. In May 1974, Latiff led the announcement of a manifesto on the formation of Kumpulan Anak Alam (Collective of Children of Nature). The collective consisted of artists, performers and writers who committed to relating to each other as a community. They engaged in activities such as poetry recitals, auctions, performances and even boxing bouts.

Pak Latiff, as he is affectionately called, spent his early years in Singapore – studying at the Kota Raja Malay School and English School Mercantile Institution in the early 1950’s. On a German scholarship, he went to study at the Hoschule der Künste (Academy of Fine Arts) in Berlin (1960 – 1964). Upon his return, Latiff embarked on an extensive tour of Southeast Asia and spent much time engaged with the landscape of Southeast Asia. This led to the publication of his first poetry anthology titled Sungai Mekong (Mekong River, 1979). On a French Ministry scholarship, he took up printmaking at Atelier La Courrière, Paris in 1969 and enrolled at Pratt Institute in New York on a John D. Rockefeller III scholarship later in the same year.

His early series of paintings, Pago-Pago (1964 – 1969) and Mindscape (1973 – 1974) claimed critical success and added intellectual weight and substance to the painting scene in Malaysia and Southeast Asia. These successes were followed by the groundbreaking series titled Langkawi (1976 – 1980), where he presented a combination of painting and sculpture for each piece. Other major series of works include Rimba (1998), Voyage (2007) and Serangga (2013). Between his literary publications, Latiff also won various Malaysian National Literary Awards (from 1972 – 1976, 1984 and 1986) and the South East Asian Write Award in 1984. In 2013, he translated Johann Wolfgang von Goethe’s Faust into Malay.