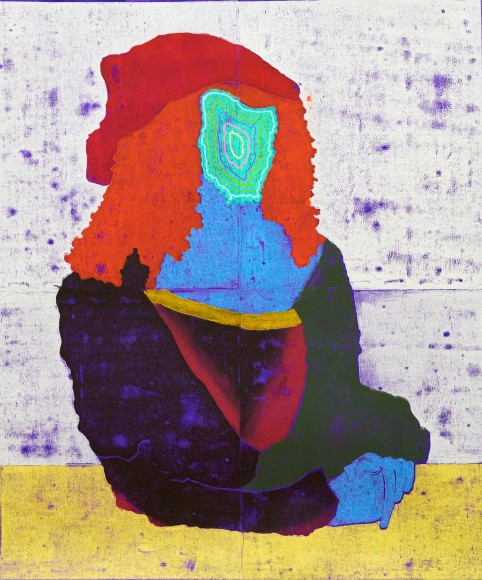 Chambers Fine Art is pleased to announce the opening on April 20, 2019, A knight of Paradise Lost: New Works by GAMA. This will be his third exhibition at the gallery. Born in Inner Mongolia in 1977, GAMA studied at the Central Academy of Fine Arts in Beijing from 1996 to 2000 before moving to Karlsruhe, Germany in 2002 where he studied painting at the Staatliche Akademie der Bildenden Künste from 2002 to 2007 and was a master student under Gustav Kluge from 2007 to 2008. He currently lives and works in Berlin.

GAMA’s formative years were spent in Inner Mongolia where his family lived a traditional nomadic existence and his aunt was an important shaman. Although suppressed during the period of Soviet domination, shamanism never really died out and GAMA was present on many occasions when his aunt entered into communion with the spirit world. The move from China to Germany was a transformative experience for GAMA as he was able to see first- hand works by European Old Masters and contemporary artists that he had previously seen only in reproductions. While he found much to admire in the vigorous figurative style of young artists associated with the Leipzig School, he felt more profound sympathy for European masters from the Renaissance to the nineteenth century whose works could be seen in such depth in the great German museums. Literature was also a growing source of inspiration to him.

In the two years since the 2017 exhibition Fata Morgana, GAMA’s has evolved a new technique that is perfectly adapted to his wide-ranging and esoteric subject matter. Previously GAMA called attention to the ability of oil paint applied to the surface of the canvas to convey three-dimensional representations of figures in space, however irrational the outcome. At the same time, he would pull the rug from under this conventional method of representation by leaving visible ragged edges of canvas that revealed the methods by which such illusions are achieved.

Recently he has been perfecting a method whereby the woodcut technique, invented in China over 700 years before its earliest use in Europe, could be applied to oil painting. However, instead of being able to use only one color at a time, he uses a method whereby multiple colors can be applied at the same time. After being used to produce an image on the surface of the canvas, the wood block is destroyed, leaving each work unique. One of the great masters of the woodcut technique, Albrecht Dürer (1471-1528) is represented in This is Classic (2019). Typical of GAMA’s fascination with shapeshifting, however, is Little Red Riding Hood named after the European fairy tale, which uses the same image of Dürer but in reverse.

Each of GAMA’s paintings is characterized by a similarly rich brew of art historical, cultural and literary references. The nearly life-size painting of a prancing horse, The Horse Proudly Gallops with Gentle Breeze of Spring replicates the celebrated equestrian portrait Whistlejacket (c. 1762) by the English painter George Stubbs (1724-1806) in the National Gallery, London, although rendered magical by its golden hooves. The title, however, is a line from a poem by the Meng Jiao (751-814), After Passing the Imperial Examinations.

Riding Alone for Thousands of Miles #21 is equally mysterious. Here the title which evokes an endlessly long journey is contradicted by the image of a horse and rider passing through the wall of a room. This may recall certain images of René Magritte although the title is taken from a 2005 film by Zhang Zhimou, Riding Alone for Thousands of Miles. This, in turn, refers to an ancient story in the Romance of the Three Kingdoms, frequently used in Chinese folklore and operas.

The dominant reference throughout the exhibition, however, is to the great epic poem Paradise Lost (1667) by John Milton (1608-1674) that relates the biblical story of the Fall of Man, the temptation of Adam and Eve by Satan and their expulsion from the Garden of Eden. As is always the case with GAMA, such literary references are not at all specific but establish a general mood. John Standing on the Wall I and II pay homage to the austere poet although he is partially transformed into one of GAMA’s more familiar folkloric munchkins. Vanitas themes abound. In The One (2017) noxious weeds and Venus Fly Traps emerge from the eye-sockets of a skull. Skulls are stacked in Epic I and II and in Aged Early but Youth Fades Away Late I and II butterflies hover over a skull perched on top of what may be the stem of a chalice or candlestick but GAMA’s woodcut – influenced painterly technique endows the fraught subject matter with delicate poetry.

As in the legends and folk tales that GAMA devours there are always multiple layers of meaning in his paintings that their apparent resemblance to familiar genres belies.